Devil with the red pill on 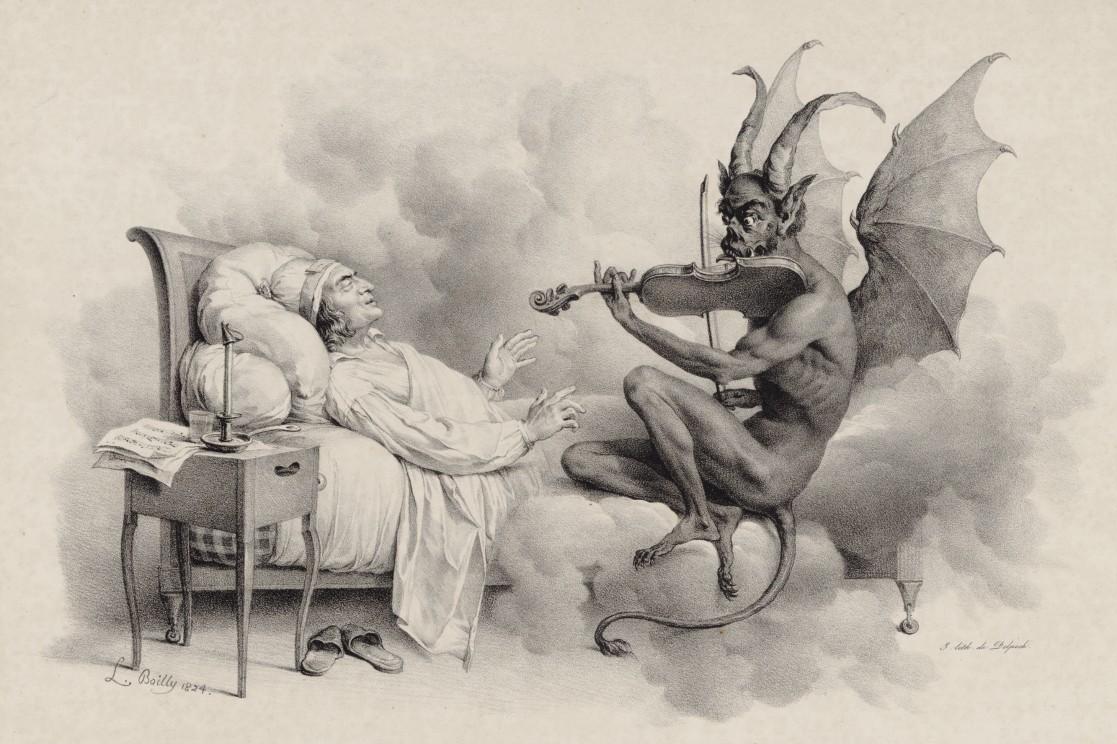 The early-mid 1980’s saw the emergence of “satanic panic”; a widespread phenomenon that, among many false allegations, fingered various Heavy Metal bands and fans as “Satanists”, and implied that the accused were involved in unsavory and/or illegal behavior.  These allegations have since been debunked by the FBI, but for the better part of a decade the devil served as the scapegoat for those who felt repulsed by an evolving art form.

Christian-based organizations, conservative think tanks and groups that were a combination of the two all cast their judgments based on (at best) loose interpretations of several Heavy Metal album covers, song lyrics and the stage antics of “suspect” bands.

To give you an idea of just how much this witch hunt was rooted in irrational paranoia, even the Progressive Rock band Rush was on a hit list of “occult” oriented bands, mainly for the band’s use of a red star inside a circle pictured on the band’s 2112 album cover. Even when taken at face value, the circled star clearly had nothing to do with Satanism as the Church of Satan’s official symbol is the Sigil of Baphomet.

Some Satanists will also use an inverted Pentagram enclosed in a circle as a symbol of recognition for the Left Hand Path.  At best, the artwork on the Rush album cover could be misconstrued as a symbol for Pagan ritual, but upon further investigation and after the album’s lyrics are taken into consideration, it becomes obvious that both implications are laughably false.   This fatuous stretch was symbolic of just how virulent conservative Christian groups became in the face of free speech.

Cut to the present, society now has a New Devil created by sanctimonious “vigilantes” hailing from the bowels of political correctness.  These feminist whitewashers have made their devil out to be a much larger and much more significant group of people than the Heavy Metal subculture was in the 1980’s.  This New Devil crosses race, sexual orientation and financial status, as it demonstrably includes any member of the male gender (and many females as well).  Not surprisingly, along with the vast change in western politics since the Regan/Thatcher era, today’s inquisition emanates from left-driven media zealots; a camp akin to its conservative Christian cousins when it comes to employing bullying tactics.

These ideological bottom feeders have made multiple attempts to hurl negative attention onto MRAs; a growing population of men and women who stand up for men as human beings worthy of equal treatment under the law.  To the politically correct, men represent everything that “got us into this mess”.  Men are the scapegoats to the world’s ills and the media has outfitted us all with horns and tails.

When men and women speak out about injustice, they are typically referred to as “activists”.  When these activists ban together to raise awareness of their cause they often times create various forms of artwork that is reactionary to their struggle.  It’s typically representative of the oppressive forces responsible for the injustice in the first place.

This is generally all fine and dandy as far as the masses are concerned – except when said artwork criticizes women, feminists or anti-male policy.  Why?  Because, to allow the devil his day in court would be blasphemous to the status quo.  All Hell would break loose.  No one wants to hear what the devil has to say because no matter what may roll off of his double-pointed tongue, it is inherently diabolical and will need to be censored forthwith.

Societal scapegoats are created to blame and shame; to foster a “negative” to an established “positive”.  However, when it is inevitably proven that certain scapegoats aren’t a perceived threat, rather just another part of the population that is neither all good nor all bad, it is “out with the old and in with the new”.  A New Devil must be brought to light for the sake of those who are “good”, in order to keep those of us who are “bad” in line.  Since the advent of pop culture mediums, outing these supposed Spawns of Hell has become not only easier but trendier.  And it is chic to hate today’s New Devil.  One appears especially dapper when pushing a clear misconception of the New Devil as truth.

It is socially acceptable for these dreck peddlers to knock and spread lies about men and, moreover, what men do for each other and themselves (i.e. their underground movements, music and art).  Our critics don’t focus on the fact that many of us have faced and dealt with adversity and abuse because it is more sensational to focus on our sometimes, and rightfully so, harsh reactions to it.  If the genders were reversed, this would be a non-issue as any female criticism of men is deemed “empowering.”

When a man shows emotion or especially when he shows vulnerability, he becomes unsuitable based on the rigid societal standards set upon him.  Unless he fits within this manufactured format by assuming the correct thoughts and actions, he could be considered a “loose cannon” at best.  Certainly, if he does not maintain a preconceived report with women, he will be ostracized.

Upon educating oneself on what the philosophy of Satanism actually is, it becomes more absurd that droves of teased-haired teenagers in Motley Crüe t-shirts were accused of blindly adhering to its principles.  I say this not to promote or denounce any religion or to knock Crüe fans, but rather to demonstrate a point, and make a parallel between then and now.

Satanism champions staunch individualism and a rational disbelief in a red guy with a tail and pitchfork.  Its one part Atheism, one part Ayn Rand Objectivism and one part Aleister Crowley.  “Responsibility to the responsible” is one of Satanism’s most promoted tenets.  Now, could someone please explain to me how a disgruntled, mentally unstable 13-year old who abuses animals and/or shoots his classmates could possibly get lumped in with Satanism?  Additionally, there is a written application process and a stiff membership fee to pay before a prospective member can legally and publically align himself with the Church of Satan.

Clearly, its detractors were creating a circus of misinformation to benefit their own Christian/conservative agendas of the day.  And to round out this analogy, MRAs are no more a “hate movement” than registered Satanists are a cat-killing gaggle of baby snatchers.

It could be said that MRAs have been deemed “satanic” by feminist media parasites when, in fact, if someone actually reads our articles and looks at our artwork without extracting and manipulating aspects of it to create falsehoods with, it becomes clear that we are not the devils we are made out to be. There are those, however, who harbor irrational fear towards us and turn their fear mongering into a fragmented career.  Through this fear they attempt to persuade their minions by disguising their efforts as journalism or some other pseudo-intellectual affectation.

Is the MRM a hate movement?  No.

Well, we do hate misandry, but we are not a movement based on hating women, of which we’ve been accused.  Not all women are misandric, likewise, not all men are rapists or greedy, evil, pillaging patriarchs.  Good grief, do these things really need to be explained?  Apparently they do insofar as bands like Slayer had to defend not only their right to free speech, but also had to interpret their lyrics for their opposition.  When an opposing force is without even the basic understanding of what they are opposing, their arguments are undoubtedly baseless.  As much as our detractors may accuse us of the same, we are at the very least, able to come up with proof time and time again that this New Devil has in fact been irrationally and legally marginalized.

And for the record, not all Heavy Metal bands (very few as a matter of fact) promote real Satanism.  Merciful Fate was one of the first to play with satanic themes.  Ever hear of a Merciful Fate or King Diamond fan hacking up babies in the name of Satan? I’m guessing not because fans of those acts might even adhere to the real tenets of Satanism, if they are in fact Satanists at all.

And MRAs might not actually be misogynistic wife beaters.

And Pit Bulls might not be bloody thirsty Hellhounds.

When MRA artwork is demonized I am reminded of a t-shirt that a gay friend of mine used to wear.  The t-shirt read “ditch the bitch and make the switch”.  Neither he, nor I ever once heard anything about the manufacturer or retailer of the shirt being accused of misogyny.  But the MRM’s critics should, by their standards, decry the shirt as promoting “hate” towards women, right?

After all, it has the word “bitch” in it and suggests that women not be paired with.  Nah, not likely.  Perhaps that is partly because it is just a humorous, gay-affirmative t-shirt and partly because…well…it is not misogynistic.  And most importantly, it was not a male-affirmative t-shirt, which is the only reason it was held to different standards in regards to public scrutiny.  But I ask, if a MGHOW was to wear that same t-shirt, how do you think he would be perceived?

Whether you’re a herd-mentality think tank stemming from the left, right or center you need a devil to oppose in order to amass numbers.  And, according to shit starter law, you’d better make damned sure those numbers usurp the group you are demonizing in order to “successfully” refute its claims.  You can only do this by opportunistically creating falsehoods and provocative drama designed to pander to different segments of the population.  In short, you’re a popularity-driven whore whose wares are based solely in narcissistic advantageousness.  The need to be admired as the saint surpasses any call to understanding, compassion and objectivity.  In lieu of my earlier analogy, I feel it is relevant to add that Anton LaVey called this the “good guy badge” in an essay he penned under the same title.

Like many MRAs, I wish not to be the good guy, the bad guy or the indifferent guy.  I just wish to be a guy in a world where being one isn’t demonized.   However crude my methods are to wake people up to this injustice, I guess I’d rather be called out for that instead of standing idly by while doing nothing, or worse yet, selling out the very real suffering of so many men in order to self-aggrandize.

The featured image is the painting Tartini’s Dream (1824) by Louis-Léopold Boilly. Public domain.