Don’t just do something, SIT THERE – A Voice for Men 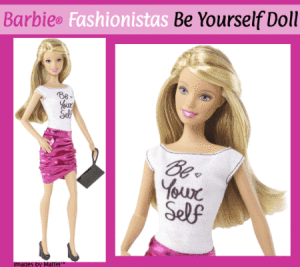 “To be or not to be- that is the question.”
Shakespeare

Being is vital to the health of everyman but is rarely given the consideration it deserves: Being at a cafe, being in nature, being with a friend, being at home, being at peace. Smelling the roses. If allowed, these things have potential to replace some of the incessant doing that drives men’s existence too early into the coffin.

We’ve all heard the phrase Women are human beings and men are human doings.1 It’s one of those catchy, hummable lines that everyone agrees with before it slips again from conscious awareness – even as it remains in front of our eyes and in our daily behavior. Even as it slips from awareness the fact remains that doing without being, and being without doing, bespeak unbalanced lives, ones that can and do lead to pathology.

Pediatric psychiatrist Donald Winnicott contends that not only is being more important than doing in regards to psychological health, but that being must precede doing in order for doing to have significance:

“Being is at the centre of any subsequent experience in life. In fact if the individual has not had the opportunity to simply be, his future does not augur well in terms of the emotional quality of his life. The likelihood is that this individual will feel empty.”

“Now I want to say: ‘After being, is doing and being done to. But first, being.”

“The ability to do, therefore, is based on the capacity to be. The search and discovery of the sense of self, in the context of therapy, is all to do with finding an identity.”

“It cannot be overemphasized that being is the beginning of everything, without which doing and being done to have no significance.”2

Being, according to Winnicott, is more important to mental health, and is ironically the thing males are most encouraged to forego in favor of doing. You’d better not relax and simply be – there is work to be done!

The trend of separating boys and girls along these lines starts early. The boy gets a dump truck and a Bob the Builder toolkit, and the girl receives a Be Yourself Barbie™. Through the person of Barbie girls learn the experience of ‘being’ in a doll’s house, and being relaxed, being pretty, being ugly, being among friends, being at a cafe, being married, or being happy, sad, jealous or vain. That’s the psychological cloth little girls are cut from.

The first question we ask a boy is “What sport do you play,” or “What kind of work do you want to do when you grow up?” Men are taught to be action figures who work, do the wage earning, do the repairs, or do their girlfriend. As long as they are doing something, we assume they are in their rightful place.

But doing can only return value if the person first exists. If he doesn’t feel like he exists on a basic level, all efforts in doing have no meaning because there is no ‘me’ doing the doings. In that instance all doing becomes futile because it never leads to a sense of me-ness. Or, if doing does provide a momentary illusion of me-ness, it all vanishes the moment activity stops. When all is still, with no future plans, many men are swallowed by an existential void.

With the modern mandate that men do and women be, there’s a dearth of male models for how to be. So for the purpose of this article lets revive a classical source illustrating what men have lost and why we would do well to rediscover it. For our purpose let’s consult the 2,600 yr old sage Lao Tzu, who cultivated a philosophy of non-doing (Wu wei), defined as follows:

Wu wei (Chinese: 無爲) is an important concept in Taoism that literally means non-action or non-doing. In the Tao te Ching, Lao Tzu explains that beings (or phenomena) that are wholly in harmony with the Tao behave in a completely natural, uncontrived way. The goal is, according to Lao Tzu, the attainment of this purely natural way of behaving, as when the planets revolve around the sun. The planets effortlessly do this revolving without any sort of control, force, or attempt to revolve themselves, instead engaging in effortless and spontaneous movement.3

Being aware of the importance of the doing/being dichotomy, one of the first books I gave my son, at the tender age of 10, was a children’s version of the Tao Te Ching by Lao Tzu. We read it together and enjoyed some interesting discussion about the wise old sage, especially about his contention that the wise man “Acts without doing” — What did it mean? I’m not entirely sure if we got the meaning right, but we decided it meant to ‘act’ in the way you want to act, without ‘doing’ what others demand or expect from you. 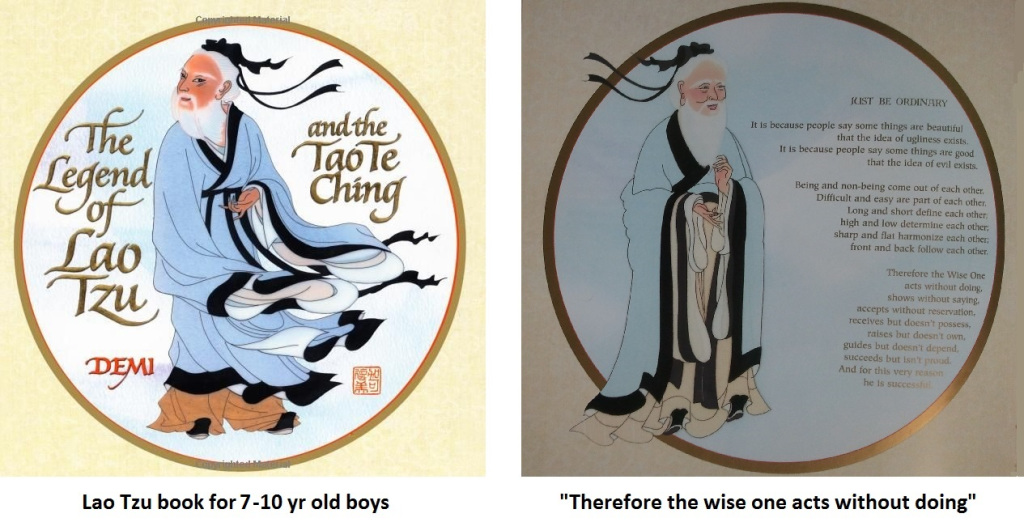 In another translation the old sage says, Act without doing; work without effort. In each of these phrases he seems to be saying let it come naturally, let it arise out of being, and not from pressures from the outside world.

None of this is to suggest that boys and men shouldn’t be active in the world. The good news for men seeking that greater balance is that you don’t have to sacrifice doing in the process. Most men really MUST do in order to be healthy. But there is a distinction to be made here between healthy and unhealthy doing.

It’s one thing to act from a spontaneous sense of self – a being self – and yet another to operate from compliance with the wishes of others because you were raised on a narrative of utility. Those living the narrative of utility must first become conscious of that before giving themselves over to an exploration of being, and if that consciousness is not first achieved then it’s guaranteed that your attempts at being will be interrupted by internal guilt or by shaming from those who have most to lose from you walking off the plantation.

As per Lao Tzu we don’t stop doing but rather become more conscious of our motives so that doing can emerge from a different center – not gynocentric duty, but conscious choice grounded in the ability to be.

Heaven does nothing: its non-doing is its serenity.
Earth does nothing: its non-doing is its rest.
From the union of these two non-doings
All actions proceed,
All things are made.
How vast, how invisible
This coming-to-be!
All things come from nowhere!
How vast, how invisible-
No way to explain it!
All beings in their perfection
Are born of non-doing.
Hence it is said:
“Heaven and earth do nothing
Yet there is nothing they do not do.”

Where is the man who can attain
To this non-doing?4

Remaining with our fictional character Lao Tzu a little longer, let’s consider the traditional tea-making ceremony legend says he helped to found. Just as Barbie is famed for her tea parties in which she teaches girls the arts of being among friends, Lao Tzu is credited with the first Chinese tea ceremony, a ritual centered in the experience of stillness and presence.

We may be reluctant to talk about a ‘Tao of Barbie,’ with her narcissistic overtones, but the tea drinking ceremonies of the Chinese and Japanese cultures deserve a nod to the noble Tao of Lao Tzu.

Taoism, like most ancient religions, talks about the balance between work and repose. By way of contrast, while Barbie also teaches girls that a work/life balance is possible, it’s not certain that Barbie takes the work part of that equation very seriously.

To summarize, a common element running through all narratives about men is doing. We hear it in phrases like “All work, no play,” “Don’t just sit there, do something!,” and “No rest for the wicked.” Men slave for gynocentric culture as its saviors, fix-it men, martyrs, protectors, laborers, office-workers, and heroes – all narratives based on doing. But there’s good reason for men to break from the cycle of servitude to enjoy some moments of being – being for themselves.

It’s time we stopped for a cup of tea: ritually made, mindfully sipped, with or without friends, and without a need to watch the clock for the next round of work.

[1] On Dr. Warren Farrell’s website the phrase “Women are human beings, men are human doings” is credited to his book Women Can’t Hear What Men Don’t Say. Elsewhere he explains: “I think the source here is yours truly. In the late 1960s, when I began speaking in this area, I used to say this. Although I’ve checked a dozen books of quotations and believe I created this, I wouldn’t bet my life on it.” (p.275).
[2] Jan Abrams, The Language of Winnicott; A Dictionary and Guide to Understanding His Work (1996)
[3] Wikipedia: Wu wei (June 5, 2015)
[4] Thomas Merton, The Way of Chuang Tzu (1965)