Folklore, Feminism, and the Erasure of Male Victimization – A Voice for Men 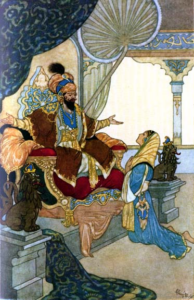 Can scholars and writers be wrong about a story they know well? That question might seem odd since academics and authors are generally knowledgeable, but the quality of their analyses depends on a variety of factors – including their ideology. There isn’t anything inherently wrong with philosophical or political interpretations of a text; at best, these readings enrich the work by bringing a new perspective. At worst, they sabotage our ability to recognize important narrative details. The latter occurs frequently when feminists deal with the frame tale in One Thousand and One Nights.

Alf Layla wa-Layla, better known to Westerners as The Arabian Nights, is an evolving tradition of folktales, proverbs, and verses. What binds the authorless and fluctuating corpus together is a frame narrative called “The Story of King Shahriyar and His Vizier’s Daughter, Shahrazad” (Horta & Seale, 2021). It goes like this: A king asks his brother to visit him. Before leaving, Shahzaman discovers his wife sleeping with another man. He kills them and makes the journey to Shahriyar’s kingdom, but is depressed. Then he discovers his sister-in-law’s affair with a slave and realizes his experience isn’t unique. Shazaman’s mood improves so much that Shahriyar questions it and convinces him to explain the cause.

After verifying the facts, Shahriyar searches for someone cuckolded worse than himself. He and Shahzaman meet a woman imprisoned by a jinni, who forces them to have sex with her by threating to awaken the entity and have it kill them. Following the incident, the kings returning home, murder the queen and slaves, and Shahriyar begins a daily ritual of marrying, deflowering, and executing women. He’s eventually pacified by Shahrazad and Dunyazad, two sisters who use the power of storytelling to distract him for one thousand one nights.

Feminists have largely embraced Shahrazad for defending women, though the sentiment isn’t universal (Shamma, 2017). Nonetheless, feminism influences perceptions of characters other than the heroine. Best exemplified by the explanations given for King Shahriyar’s gendercide. Based on the sequence of events, his violence occurs after he and his brother encounter the jinni’s prisoner. Her use of death threats to acquire sex from them qualifies as an act of rape (FindLaw, 2019). Thus, sexual victimization motivates Shahriyar’s bloodlust. This interpretation is bolstered by research on sexual violence; prior victimization is a risk factor for perpetration (CDC. 2022). Despite the evidence, scholars attribute the king’s rage to his wife’s infidelity:

“As a result of [discovering the adulteries of each of their wives] the royal brothers institute a policy of marrying young virgins every evening and executing them the morning after.” (Grossman, 1980)

“Shahrazad has been sentenced to die in the morning by the Sultan Shahriyar who, in revenge for the infidelity of his Sultana… has decided to marry a virgin every night and cut off her head in the morning.” (Warner, 2011)

“What maddens Shahriyar initially is the discovery of his wife’s adultery with a servant – a loss of innocence compounded and apparently universalized by the discovery that his brother’s wife enjoys a similarly adulterous liaison with a black slave.” (Trumpener, 2013)

“[Scheherazade] volunteers to marry King Shahryar, a man determined to punish women for the duplicity and infidelity of his first wife.” (Aggarwal-Schifellite, 2021)

The inability or unwillingness to recognize the rape has led to distortions of the narrative in critical summaries.

The focus is placed on different issues:

Or the rape is framed as consensual sex:

“The woman, kidnapped on her wedding night, takes the opportunity, while her captor is asleep, to seduce the two brothers.” (Malti-Douglas, 2004)

Or the crime is misidentified:

“…both brothers are blackmailed into sexual intercourse by a young woman who has been locked up by a demon (‘’ifrit’) who kidnapped her on her wedding day.” (Enderwitz, 2007)

These obfuscations are reinforced by literary productions. For instance, “Scheherazade Retold” (Phelps, 1981) and The Ninety-Ninth Bride (King, 2014) both depict the Sultana sympathetically. They recontextualize her infidelity, by implying it never happened in the former, or making her a victim of an unwanted and abusive relationship in the latter. Consequently, her lover’s status as a slave, and the exploitative nature of their relationship, is expunged. By contrast, both retellings worsen the Sultan’s character. This is done by omitting the rape and removing his brother, whom he genuinely loves and treats well. They also kill him off instead of letting him reform like in the original text.

Feminist retellings that are more accurate to the source material still exemplify these problems. “Shahriyar and Shahrazad” (al-Shaykh, 2014) maintains the loving relationship between the brothers and the queen’s unfaithfulness. However, the rape appears in a separate story, “The Demon’s Wife,” making it unrelated to Shahriyar’s murders. Moreover, the author included the episode for artistic and ideological reasons: “And, of course, for all the stories the theme was women were wily and men were oppressive, in a way” (NPR, 2013).

Some people might ask why it matters that old stories are being analyzed or adapted improperly when there are more pressing issues. The answer is twofold. Firstly, feminists either can’t or won’t make space for men’s experiences of sexual victimization, even in a fictional context. Secondly, that ideology is pervasive within academia. MRAs must reclaim these stories, or allow feminists to marginalize and appropriate them at the expense of male students and survivors.

Al-Shaykh, Hanan. (2014). One thousand and one nights: A retelling. Anchor Books.

Enderwitz, Susanne. (2007). Shahrazad is one of us: Practical narrative, theoretical discussion, and feminist discourse. In U. Marzolph (Ed.), The Arabian nights in transnational perspective. (pp. 261 – 278). Wayne State University Press.