Living in the UCCR, aka the Union of COVID Collectivist Republics 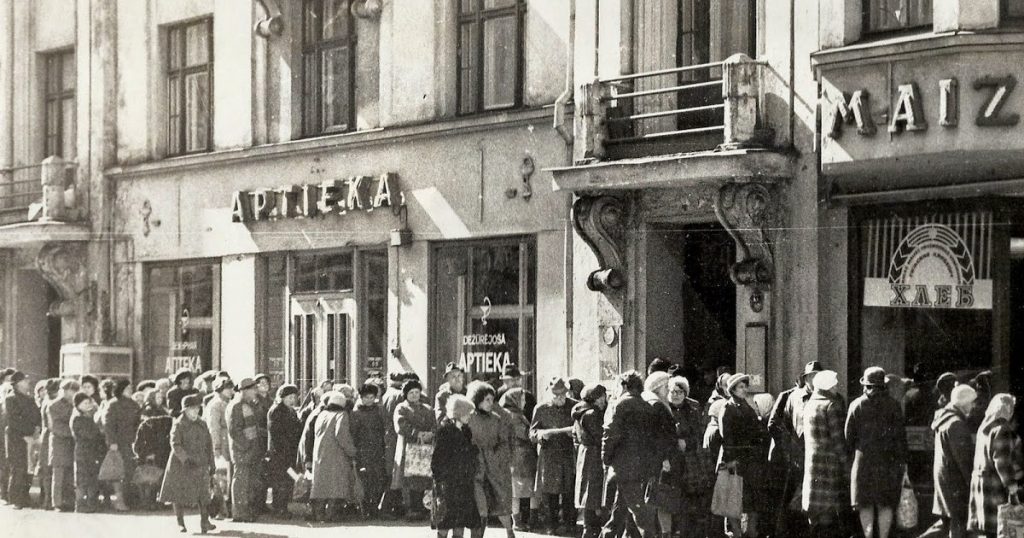 This is a familiar scene, so familiar that it has now become the New Normal. You are in a supermarket searching diligently for toilet paper to hoard for the long haul, but although the cardboard sign reads “1 package per family,” the shelves are as bare as Old Mother Hubbard’s cupboard, and have been for weeks. The same with kitchen towels, whose once plentiful supply we never learned to appreciate. Produce is still available, as is dairy and meat, but the freezers are beginning to thin out. A few bars of unsalted butter can still be found, though even at one per family, the future augurs a breakfast of dry toast, assuming the loaves haven’t gone the way of all dough. A couple of bags of unpopular frozen veggies slump forlornly in the cooler, the same ones you saw yesterday, but they too will be casualties of tomorrow. To add insult to injury, it is often the lesser brands and inferior products that remain on hand.

Nonetheless, these are the same people who drive across the border to the U.S. to fill up their vehicles since a gallon of gas in capitalist America costs the equivalent of a litre—one-quarter of a gallon—in socialist Canada. Indeed, shopping expeditions to Blaine or Bellingham in northern Washington State in order to take advantage of greater choice, better goods and lower prices were once weekly events for them. The contradiction never seemed to dawn, as it never does upon the conscience of a good socialist.

After all, good socialists are an impenitent breed, as their beliefs and behavior make amply clear. Cuba, where people work for a pittance and live in fear of a repressive regime, is regarded as the victim of a Yankee embargo. China, the world’s largest polluter (in every sense of the term), is by their lights a well-governed nation slandered by conservatives. Venezuela, probably the planet’s most fetid hellhole, has obviously been brought low by the rapacious policies of colonialist America—indeed, a sure sign of American perfidy is its refusal to send enough protective anti-viral masks to Canada. That the U.S. may not have sufficient to serve its own needs is irrelevant. Still, once the borders are open, we will be flocking through the Peace Arch Historical State Park to load up on non-carbon taxed supplies and inexpensive merchandise, returning to a progressivist country of which we are inordinately proud.

Meanwhile, the travesty and tragedy proceed. A more recent development has emerged to trouble public convenience. Lines have begun to form, carefully surveilled, at the entrance of stores and shops across the city, and no doubt in other parts of the country as well. At a small, out-of-the-way BuyLow where my wife and I briefly stopped hoping to avoid a crowd, people waited outside to be admitted one by one. At a large, hypermodern SaveOn, outdoor monitors herded the line like bouncers at a nightclub. Once inside, customers would be met by an air of desolation, rows of empty shelves, and a straggle of distracted and disappointed shoppers. No one is happy. Everyone is worried. Even the times allowed us to partially replenish our dwindling reserves are being rationed as new lockdown orders are promulgated. True, we are not—or not yet—being tracked by drones or trammeled by a slate of punitively excessive restrictions, as is the case in the U.K., but we should not be surprised if or when new enforcement measures are prolonged, perhaps indefinitely.

Where have we seen this before?  I have pointed out to some of my anti-American neighbors and leftist acquaintances that such were, mutatis mutandis, the conditions that prevailed in the heyday of the socialist utopia of the USSR: long sidewalk queues at grocery stores and dry goods outlets, uniformed surveillance, bare shelves, prohibitive costs for basic necessities, stringent regulations coming down from on high, an atmosphere of depression and misery, and no intimation of when the nightmare would be over. But, to be fair, the picture was not entirely grim. The vodka was plentiful. Similarly, our liquor commissions are open. I have enough wine and Scotch to keep me going for months.

There are many well-known books recounting life in the Soviet Union, but among these I would recommend two lesser-known works, the very readable novel Forever Flowing by Vasily Grossman and the dauntingly massive but indispensable treatise The Soviet System: The Political Economy of Communism by Janos Kornai. Also, it helps if one knows Russian and Eastern Bloc immigrants whose memories of daily life in the USSR and its satellites are intact. Their stories are uniformly dismal reports of market scarcity, strict policing, limited freedom, the practice of evasion and poorly rewarded patience.

The assault on individual integrity was also demoralizing. Being forced to parrot and internalize state-fed lies demolishes one’s personal sense of dignity. As Theodore Dalrymple observes in Our Culture, What’s Left of It: The Mandarins and the Masses, “When people are forced to remain silent when they are being told the most obvious lies, or even worse when they are forced to repeat the lies themselves, they lose once and for all their sense of probity… A society of emasculated liars is easy to control.”

The moral debacle grows even more critical when such lies become second-nature, part of one’s unexamined belief system, as appears to be the case in the progressivist West. As Orwell noted, lies becomes truths. A good friend who emigrated to Canada from Romania and felt blessed to live in a free and prosperous country is now appalled by the socialist mantras and political degradation he meets everywhere, reminding him increasingly of his former country. “People don’t seem to know anything,” he remarks, “they don’t know what they are losing.”

My friend is right. The people I have spoken to are rigorously innocent of history, as are the many leftist journalists, politicians, talking heads and writers who swarm the public forum, along with the indoctrinated millennials, the brain-dead celebrities, our K-12 elf piñatas and red pantaloon academics who should know better—and the shoppers at our market mausoleums. The pandemic has brought home to us what it might have been like living in the USSR—or at any rate it should have—and what it may well be like living in a post-COVID managerial and regulatory state after our leaders have sampled the joys of centralist authority and the nation’s citizens have been cowed into a condition of docility, resignation and submission. This, regrettably, is not beyond the realm of possibility.

In the absence of a reasonably educated electorate and patriotic and indefatigable leaders like Donald Trump, I suspect the worst. Writing in American Thinker, Sally Zelikovsky believes that we can adopt prudent measures to combat the disease “while going back…to normal.” Perhaps we can find a middle ground between the draconian and the domestic, but we cannot take common sense and enlightened thinking for granted. If we are not vigilant we may soon enough find ourselves inhabiting the UCCR, that is, the Union of COVID Collectivist Republics, with no end in sight. That is a political pandemic from which there is little chance of a full recovery.

David Solway’s latest book is Notes from a Derelict Culture, Black House Publishing, 2019, London. A CD of his original songs, Partial to Cain, appeared in 2019