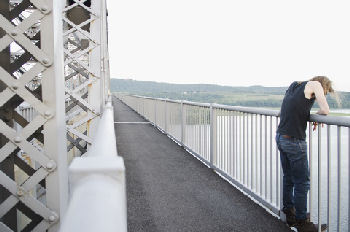 MALE SUICIDE:  THE PROVERBIAL “ELEPHANT IN THE ROOM”

The World Health Organization (www.who.int)  reports that 450,000,000 souls out of the 7,466,598,202 souls with whom we share space on Planet Earth are struggling with mental disorders.  The mental disorders include, but are not limited to, dementia, depression, Alzheimer’s disease, epilepsy, anxiety, schizophrenia, and bipolar disorder. Suicide.org (www.suicide.org), a  501(c)(3) non-profit organization which provides a forum for suicide survivors  — souls whose loved ones have committed suicide–, estimates that 1,000,000 souls throughout our global village commit suicide annually.   While the suicide rate among the world’s male population – 3,766,212,140 souls –  our sons, fathers, grandfathers, husbands, fiancées , uncles, brothers, cousins, nephews, neighbors, and co-workers — is rising at an alarming rate, Male Suicide continues to be the proverbial “elephant in the room”.

So, why is society, as a whole, ignoring Male Suicide? And why do so many of our sons, fathers, grandfathers, husbands, fiancées, uncles, brothers, cousins, nephews, neighbors, and co-workers feel that killing themselves is the only option they have available to escape the excruciating psychological, spiritual, and emotional pain that engulfs their souls?

Some profound answers to this question can be found in an article entitled, “It’s Society, Not Biology That Is Making Men More Suicidal” published by a British newspaper, The Telegraph (www.telepgraph.co.uk) and  penned by Mike Snelle:

“ . . . Our culture treats people with depression  as if there is something wrong with them; a biological imbalance best treated with medication. But if it’s impossible to understand biology outside the context of environment, and there is a frightening increase in male suicide and depression, perhaps we need to take a closer look at the other variable – our environment. An increase in mental health problems, and in particular suicide rates amongst men, suggests that the environment we live in has become more hostile to men.  If depression is the mind’s way of telling us there is something wrong in our environment, then the broader increase in male suicides is telling us that there is something wrong in our society.  We are trained to be in competition with one another, and rewarded for ruthlessness. Empathy and emotional understanding are regarded as weaknesses. . . . “

Mr. Snelle suggests that we need to connect the dots between what is going on in our environment – our society – a society that is not friendly to Men – a society which, as a whole and in general, transmits mixed signals to Men about masculinity, their societal roles and responsibilities, their value as human beings, and the rules of engagement for courtship and marriage – and the unique psychological, spiritual, and emotional issues that confront them every waking moment of their lives.  Mr. Snelle also takes a stab at the manner in which Men are socialized  about strengths and weaknesses as they make their journey from childhood to adulthood  through his inferences about competitiveness, ruthlessness, empathy, and emotional understanding..   He is drawing a straight line from mental illness and Male Suicide to the manner in which males are socialized about strengths and weaknesses.   It is this socialization that many of the souls who are males in our global village use as a yardstick to measure their “worthiness” and their ability to successfully navigate  and transcend the environment they were born into.

A serious need exists to rethink the manner in which we socialize boys during their journey from childhood to manhood.  When boys and girls emerge from the womb, they emerge from the womb with the same set of emotions and the same set of spontaneous and natural responses to physical, emotional, psychological and spiritual pain.   They emerge as “whole souls”.     When boys — Our Sons — reach a certain age, they are summarily discouraged from expressing their inborn and spontaneous reaction to pain.  As an example, they are not allowed to cry.  Crying is deemed to be “unmanly”.   On the other hand, girls — Our Daughters — are allowed the same emotional freedom we deny to Our Sons.  Now, I am not trying to feminize Men and Boys – something a number of my detractors have publicly accused me of.    We have socialized boys in such a manner during their journey from childhood to manhood that they believe that no matter how great the physical or emotional pain they are experiencing, they must not talk about it or cry out for help.   Boys are socialized to believe that any expression of or reaction to pain is a demonstration of their vulnerability and vulnerability is equated with weakness.   This is so unhealthy that it borders on insanity.  In actuality, the expression of vulnerability denotes strength.  Allowing yourself to be vulnerable opens you up to risks.  A strong person, totally cognizant of the risks associated with vulnerability, will take that leap of faith.

Men and Boys who do not practice or are not allowed to practice “emotional freedom”  implode — self-medicate through alcohol, work, food, drugs, or sex or — seeing no other options for themselves, end their pain by committing suicide).  Those who do not implode, explode. Their years of pent-up anger, frustration, and hopelessness manifests itself in horrific acts of violence which create grave public safety issues.

A need exists for all key stakeholders to engage in an open and solutions-based dialogue that addresses Male Suicide, the resocialization of males as they make their journey from childhood to manhood, and the creation and maintenance of mental health resources and support services for Men and Boys.  In the United States, we can seek out legislators and encourage them to introduce, support, pass, and enact legislation which will establish an Office of Men’s Health in the United States Department of Health and Human Services.  An Office of Men’s Health has the potential to,  among other things,  focus on the unique mental health issues of Men and Boys through national mental health awareness campaigns, create mental health facilities that specifically address the unique emotional, psychological, and spiritual issues and needs of Men and Boys, and provide increased research and research funding that aggressively and effectively addresses the unique health issues of Men and Boys.

The same mixed signals that are transmitted by society to Men and Boys are also transmitted to Women and Girls.  Everyone has bought into the misperceptions and myths about Men and Boys.  What do we really believe about Men and Boys?  Do we believe that they do not cry . . . that they do not have a full range of emotions  . . . that they are emotionless automatons?  Are the concepts that we have about Men and Boys based on reality?  One of the key “pieces of the puzzle” to ensuring that Male Suicide no longer remains the “elephant in the room” and creating a world in which Men and Boys no longer feel that killing themselves is their only escape from an existence that is emotionally, spiritually, and emotionally painful, lies in changing our misperceptions about them and creating an environment that provides them with emotional freedom.  Men and Boys will only allow themselves to be vulnerable with souls whom they know respect them – souls who are trustworthy.  Each of us has the power to create an environment that gives Men and Boys the emotional freedom they so desperately need.  All we need to do is demonstrate – through our deeds – that we respect them and that we are trustworthy.