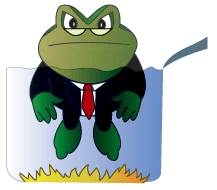 Over the past half century or so there have been unprecedented changes in higher education which most exquisitely are explained by The Frog Theory.

Per Wikipedia, The Frog Theory goes as follows: If a frog is put suddenly into boiling water, it will jump out, but if the frog is put in tepid water which is then brought to a boil slowly, it will not perceive the danger and will be cooked to death.  Higher education in America today has been most thoroughly cooked to death.

When I entered ultra-liberal Antioch College in 1957 we were encouraged to read, listen to, explore and debate a wide range of points of view. To this day I remember one course on Modern Political Ideologies where I read both The Communist Manifesto as well as The Blue Book of the then secret and far right John Birch Society.  I don’t recall ever hearing the words “free speech zone” nor recall any protests against invited speakers.

Because I believe in the value of the traditional liberal arts, I have spent my entire adult life teaching.  Sadly, the freedom and the light to explore the life of the mind that I enjoyed as an undergraduate has been extinguished on virtually all campuses today.

The cause of this immense loss has been the triumphant march of Political Correctness and Feminist-Progressive Ideology which have overtaken unfettered thought and free inquiry on campus and replaced them with a singularly hateful and monolithic anti-male point of view.

Arguably, for the quality of relationships between men and women as well as the training of our future political leaders, America’s ideology factories must be shuttered immediately and new institutions must be created which honor and respect the grand tradition of a liberal arts education – for both men and women.

Diversity aside, the most effective Exhibit A in support of this argument is an honest look at what today’s universities (along with K-12) have done to and for — boys, men, and fathers.