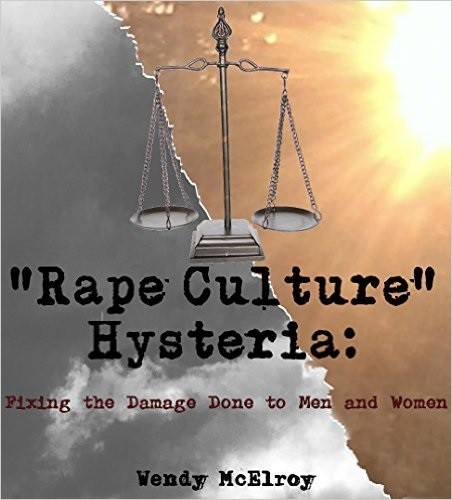 Fixing the Damage Done to Men and Women offers a comprehensive overview and debunking of the “rape culture” myth that has devastated campuses and is spilling into Main Street America. An ideological madness is grotesquely distorting North America’s view of sexuality. The book applies sanity to the claims that men are natural rapists and our culture encourages sexual violence.

Written by a libertarian feminist and rape survivor, Rape Culture Hysteria opens with a highly personal appeal to depoliticize rape and treat it instead as a crime. Victims need to heal. Politicizing their pain and rage is a callous political maneuver that harms victims, women and men.

Chapter One: The Fiction of the Rape Culture defines the “rape culture” and explains why it does not exist in North America. It glances back at how the fiction became embedded into society, especially in academia. Then it looks forward to an emerging rape culture trend that will deeply impact daily life: microaggressions.

Chapter Two: Intellectual Framework and Myth History of Rape Culture. The myth did not arise in an intellectual vacuum. In a straight-forward manner, Chapter Two explains the theories upon which the rape culture is based, including social construction, gender, patriarchy, post-Marxism, and social justice. It rejects three of the rape culture’s founding beliefs: rape is facilitated by society; men have created a mass psychology of rape; and, rape is a part of normal life.

Chapter Three: Dynamics of the Hysteria and Psychology of Rape Culture True Believers. The dynamics of rape culture politics are exposed through the behavior of its social justice warriors. A recent travesty is used to showcase those dynamics. On November 19, 2014, Rolling Stone accused members of a University of Virginia fraternity of gang-raping a female student. The accusation was quickly revealed as untrue. The unraveling at U-Va. is a perfect vehicle to illustrate how rape culture dogma is maintained even when it is revealed to be untrue. The chapter discusses effective tactics with which to handle social justice warriors.

Chapter Four: Data, False and True. The rape culture myth is based on untrue and unfounded “facts,” which have been repeatedly refuted. Yet they lumber on as zombie stats, kept alive by those to whom the lies are useful and so are repeated like a mantra that drowns out contradicting evidence. This chapter examines of some of the more prevalent zombie stats such as “one in every 4 or 5 women will be raped in their lifetimes.” Where did the faux “facts” originate? What evidence, if any, supports them? Which stats better reflect reality?

Chapter Five: Comparative Studies and Surveys. This chapter compares and contrasts four of the most important, frequently cited studies and surveys on rape: National Crime Victimization Survey; National Intimate Partner and Sexual Violence Survey; Campus Sexual Assault Study; and, Uniform Crime Reporting Program. They are analyzed independently but also compared to each other, including major strengths and weaknesses. Lesser studies are also analyzed in passing.

Chapter Six: Harms of the Rape Culture. The gender war must end. Chapter Six offers in-depth analysis of the extreme damage it inflicts on innocent people, with emphasis on the damage done to victims of rape. Victims are a focus because rape culture adherents claim to be their greatest champions; the opposite is true.

Chapter Seven: Solutions to Rape Culture Hysteria. Moving Toward Sanity. We can fix this. This is the ultimate message of the book. Undoing the damage is not only possible but also within reach. The solutions offered range from radical suggestions, such as abolishing the Department of Education, to more modest ones, such as recognizing rape as a criminal matter to be handled by police.

Defend yourself and your children against rape culture zealots. Demand sanity.

Rape Culture Hysteria is a must read for anyone wanting to understand what the hell went wrong with America and other primarily English speaking countries.