NCFM Chicago Chapter President Tim Goldich, Superman vs. Superwoman: Why is one more popular than the other? 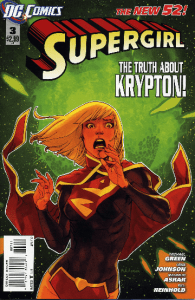 Superman vs. Superwoman: Why is one more popular than the other?

We often hear the lament: Why are there so few female superhero movies and why do they so often fail at the box office? The answer is simple feminism tells us, men are “threatened” by powerful women. Well, let’s think about this . . .

Powerful men have sex appeal. The perception of men as “powerful,” “autonomous,” “privileged” and “entitled” is magnified for the sake of audience gratification in general, plus male fantasy fulfillment, plus female sexual arousal. To achieve maximum male arousal, the media need only present men with a pretty female showing some skin. To achieve maximum female arousal, the media must present women with a handsome man who’s heroic, strong, aggressive, confident, successful, wealthy and powerful. From a feminist perspective, Michael Keaton gets to be Batman while Kim Bassinger just stands there. From a masculist perspective, to have the same sexual impact as she, a man has to perform, achieve, and succeed at impossible, stratospheric levels, while a woman need only stand there. 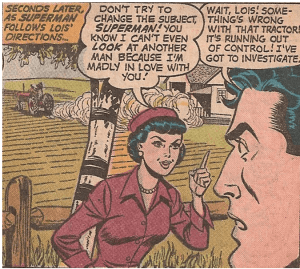 Moreover, Ordinarywoman Lois Lane turns her nose up at mere Clark Kent (her own male equivalent) and holds out for Superman. If mere Lois Lane takes no interest in him, how can we credibly depict Superwoman falling hard for Mr. “Mild Mannered”? Wouldn’t Superwoman only have eyes for Godman?

In Superman I, our hero defies law and turns back time to save the woman he loves. In Suprman II, he gives up his powers, gives up everything, to wed the woman he loves. Seeing an ordinary woman bring the male superhero to his knees, the female audience member is invited to hope and dream. Superman is hero to both sexes. But, let’s face it, female superheroes take little interest in men. In fact, both Xena and Wonder Woman are implicitly lesbian. In her essay, Wonder Woman: Lesbian or Dyke?, Trina Robbins quotes Robert Kanigher (Wonder Woman author since 1948): “the amazons from her home, Paradise Island, where no men are permitted, were all lesbians.” Her Paradise Island is “paradise” exactly because it isn’t blighted by men. “Marston [Wonder Woman’s creator] occasionally hints that Wonder Woman might be in a Xena and Gabrielle relationship with another woman.” Actually, two other women: best friend Paula and Marya, “a beautiful eight foot tall ‘Mexican mountain girl,’ who definitely has a crush on Wonder Woman.”

Getting in the way of Wonder Woman’ relationships with other women is always Steve Trevor, the Token Boyfriend. The Lois Lane to Wonder Woman’s Superman . . . She always puts him off, when he asks her when they will marry, with statements such as, “When justice has finally triumphed over wrong!” or “When evil and injustice vanish from the earth!” In other words, it’ll be a cold day in hell, buster. . . . Steve Trevor is not only the Token Boyfriend in these comics, but often the Token Male in stories that otherwise feature only women. Any other males in these stories are usually villains, like Mars, god of war and sworn enemy of the amazons.[i]

But Lois Lane’s no “Token Girlfriend.” She’s a tough, opinionated, independent career woman and the love of his life. 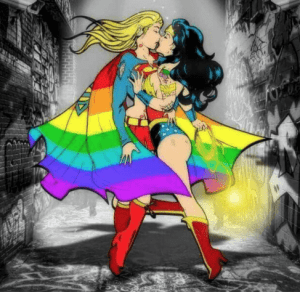 When asked if Wonder Woman is “queer,” current WW author Greg Rucka responds: “obviously yes. And it needs to be yes for a number of reasons. But perhaps foremost among them is, if no, then she leaves paradise only because of a potential romantic relationship with Steve [Trevor]. And that diminishes her character. It would hurt the character and take away her heroism.” So, basically, a heterosexual Superwoman just wouldn’t make any sense? Is that it?

If all this weren’t enough, to reproduce Wonder Woman’s Paradise Island, there are reports of female-only showings of the new WW film.[ii] Males are shut out at the door. And those who protest are shamed as “fragile” and “crybabies.” But it gets even worse. The male hero protects good women from bad men. Will our female hero protect good men from bad women? Of course not, that would be “absurd.” So our heroine will also protect good women from bad men. The hero becomes female, but the villain remains male.

However, “threatened” and “sexist” and “misogynist,” and “male chauvinist” accused men may be, I for one will forgive them for not packing movie theaters to root for a heroine whose uber-status renders her indifferent to men (if not actually lesbian), who beats up others of his kind (men), and aligns herself against others of his kind—films in which the basic dualism of virtuous feminine/villainous masculine holds as usual, but without even the one hero male to help balance the scales.

What would “female-ism” demand of us men? What is there in all this for self-respecting males (and I think there are still a few of us left) to embrace? What, from his point of view, is the payoff here? If, in defiance of feminism, we were to actually take gender reality under consideration, then there’s no mystery; no need to resort to “misogyny” for an explanation. Gender reality amply explains why men tend to stay away and female superhero movies tend to bomb at the box-office. Supermen are heroes to both sexes, but Superwomen are heroes to women and women only.

What equalism understands, but feminism does not, is that the human world is as it is as a result of a vast gender dance in which Woman is equal partner. Female influence, however passively plied, is real and a balanced (equalist) view of gender reality cannot be achieved until this truth is properly entered into the gender-political equation. Much of the depiction of men as “supermen” is, and always was, an effort to turn on the ladies. As the media caters to male sexuality by giving them beautiful women to look at, so the media has catered to female sexuality by giving them Supermen to look at. For women, nothing less will do. In this dynamic women are not pawns; they are powerful participants.

Superman vs. Superwoman: Why is one more popular than the other?