NCFM Director of NCFM Deborah and Jael’s Warriors Against False Accusations, Lori DeBolt, Invites You to Join Us in DC 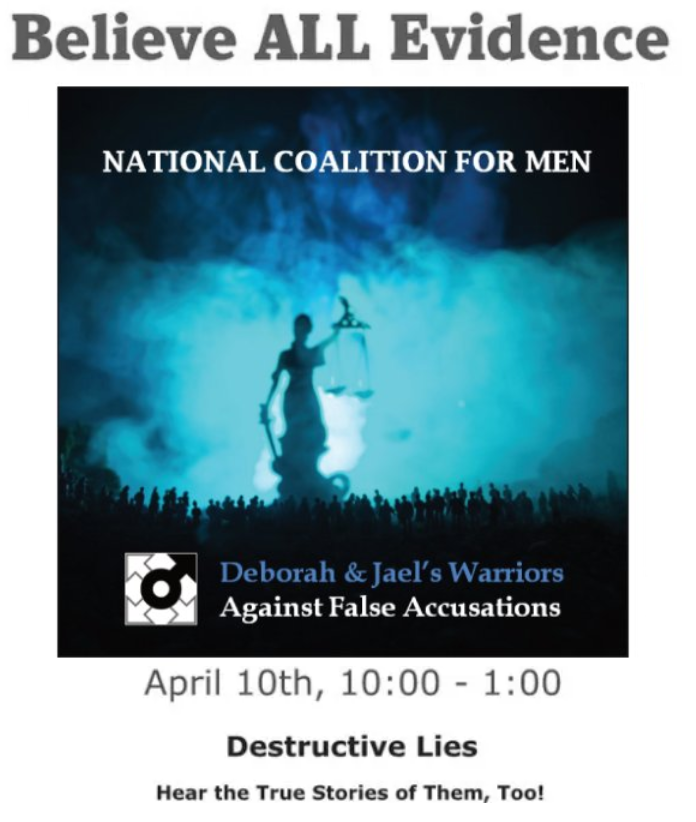 When your whole world crashes because of False Accusations of Sexual Assault, please know You Are Not Alone! False accusations destroy the lives of our men and rip them away from the families that love them; and, it is much more common than you are led to believe!

When Lori DeBolt, Melissa McFadden and Cam O’Brien met in July of 2020 to share stories of their sons, a powerful movement was born. They discovered they were not alone and that their stories were strikingly similar. False accusations are common and they are destructive. With the blessing of Harry Crouch, President of National Coalition For Men, Lori formed NCFM-Deborah & Jael’s Warriors Against False Accusations.

Come join us at Freedom Plaza in DC and meet with moms who have sons in prison because of false accusations of sexual assault. Discover how organizations are using grant money from the Office of Violence Against Women to bias sexual assault investigations by training law enforcement professionals to view red flags as normal “victim” behavior. Hear the truth about the overly restrictive, ineffective and fiscally irresponsible Sex Offender Registry.  And, listen to heartbreaking stories about how false accusations have destroyed our men in family courts and alienated them away from their children.

Melissa McFadden, author of “Destructive Lies: True Stories of Them, Too”, will share her son’s story about how false accusations imprisoned him for 15 years and forever changed their family life. This life shattering experience compelled her to put together the anthology of true stories from across the USA. You’ll also meet some of the women who contributed their stories to this book.

Tim Goldich and Les Bender, President and Vice-President of NCFM – Chicago respectively, will talk about the other half of gender reality. Lori DeBolt will speak on several topics including how the women’s movement is actually hurting women by destroying the men they love. Debra Grund, Katrina Overfield and others will also share their painful stories of how the men in their lives were destroyed.

If you or someone you love has been falsely accused, we are speaking out for you! If you’re not sure where you stand on false accusations of sexual assault, come join us! We guarantee you will walk away with a heavy heart and a better understanding of how easy it is for our men to be destroyed by false accusations.

NCFM Director of NCFM Deborah and Jael’s Warriors Against False Accusations, Lori DeBolt, Invites You to Join Us in DC

Original Story on NCFM
These stories are from NCFM.
()