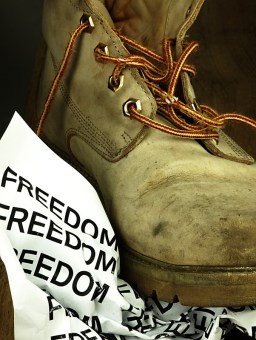 “There is no greater tyranny than that which is perpetrated under the shield of the law and in the name of justice.”

On August 12, 2016, NCFM took a historic step to file formal complaints involving the three primary prosecutors in the wrongful prosecution of Major Christian ‘Kit’ Martin. In addition to the respective state bar associations, the complaints were also forwarded to and received by (confirmed) the USDOJ, Criminal Section, Civil Rights Division. We are considering filing six more complaints.

Potential federal criminal law violations include but may not be limited to, as appropriate and applicable;

Each complaint package contains more than five dozen pages including sworn affidavits, from numerous witnesses which gut the credibility and conduct of Bashore, Garrett, and Atkins. Each one also contains a support letter from Save Our Heroes and the Center for Prosecutor Integrity.

Here is a small sample of statements that witnesses provided in their affidavits. Information that might identify them was them redacted. 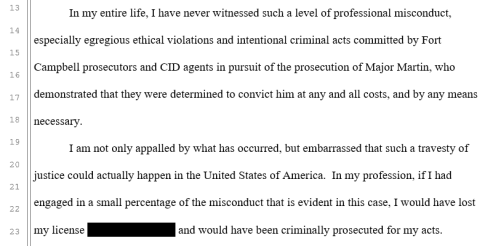 This witness made it clear that they intend to exercise their 1st Amendment rights as they are very concerned about retaliatory acts.

JAG leadership has thus far refused to investigate misconduct with which we are concerned. NCFM emailed and mailed a letter to the commanding officer of the Army JAG Corps, Lieutenant General Flora Darpino two weeks AFTER the initial filing complaints. The letter asked her to report such misconduct to applicable state bar associations as required by governing rules of professional conduct.

We did not receive a reply from LTG Darpino. Instead, we received a letter from Colonel William Kern, Chief of the Army JAG Professional Responsibility Branch sidestepping our complaint, claiming they would not consider it until after the post-trial phase (whatever that is) because of Major Martin’s two misdemeanor convictions, which is absurd and a clear violation of the federal obstruction of justice, a felony offense. We anticipated nothing more and are advocating for the U.S. Justice Department’s intervention. Though, we are not holding our collective breaths for help there either.

Let’s not forget, as we have been reporting for over a year and a half, from what we can tell, blatant prosecutorial misconduct resulted in Major Martin’s manufactured misdemeanor charges in a complex case based on skulduggery, bigamy, adultery, and a trail of malicious lies by Major Martin’s gold-digging ex-wife.

This is just another example of kicking the can down the road until the problem to goes away, which we also anticipated. Therefore, we added the following language from the original complaint addendum to the USDOJ letter.

Also recall three people were murdered, one of which was a key defense witness (see NCFM update in the False Accusation and Wrongful Conviction Case of Army Major “Kit” Martin). It appears, Army JAG hierarchy is little concerned with these related murders and harm to innocent victims associated with this case. More important is the persecution, conviction and destruction of a highly trained, competent, dedicated, if not heroic soldier based on unquestionably false allegations of sexual misconduct and other contrived transgressions. All inconceivable.

Such utter insanity reflects the current state of the current military justice system — taking all allegations of sexual misconduct to court-martial, absent validity, even when it’s known the allegations are false, and regardless of collateral damage with no concern for fairness or truth.

Moreover, it seems military leadership is little concerned if innocent people are imprisoned, get murdered, commit suicide or have their entire family and future destroyed in the process. In our view, a high price to pay to appease misandric politically correct sexual assault industry advocates. It seems the Army JAG Corps’ moral compass points away from loyalty, honor, truth, and justice, the new social norm.

We believe there are over 500 men, falsely accused and wrongfully convicted of sexual misconduct, or ‘collateral’ offenses, languishing in military prisons. Many more were wrongfully charged and rightfully acquitted; even so, the financial and emotional harm to themselves and their families is beyond tragic, it’s torturous, unrelenting, and devastating.

To be clear, in ALL cases involving false allegations of sexual misconduct, that result in a conviction or even an acquittal, there WILL BE investigative or prosecutorial misconduct, period. Such maladministration and injustice cannot occur without manipulating, manufacturing, planting, or otherwise corrupting evidence, to include coercing and otherwise threatening witnesses.

It seems JAG and Pentagon commanders, like LTG Darpino and others associated with the Major Martin debacle and similar cases chose not reign in rouge subordinates, not even when presented with overwhelming evidence of egregious criminal behavior. Clearly, they have the authority, the Army’s 2015 Commander’s Legal Handbook, published by the Judge Advocate General’s Legal Center and School states in part;

“Commanders have inherent authority to investigate any matter under their responsibility… for the purpose of furthering the good order and discipline of their command.”

Consequently, flooding with complaints, state bar associations, United States Department of Justice (USDOJ), and other oversight agencies may help cause corrective measures, including sanctions, disbarment, and convictions, as applicable.

Moreover, the wrongfully convicted, their family members, friends, religious leaders, and professional acquaintances, should consider sending copies of the complaints to their elected state and federal officials, especially their respective members of the Senate Armed Services Committee and House Committee on Armed Services, and the U.S. Department of Defense Standards of Conduct Office.

Until the Department of Defense (DOD) develops some type of conviction integrity unit, there is no way to bring righteousness into the process. We, as citizen advocates, must file one complaint after another until we strike a receptive nerve or two in the system.

We hope to hear of more examples from wrongfully convicted service members and their families of this novel approach to bring attention to this level of prosecutorial misconduct and abuse. Please let us hear from you.