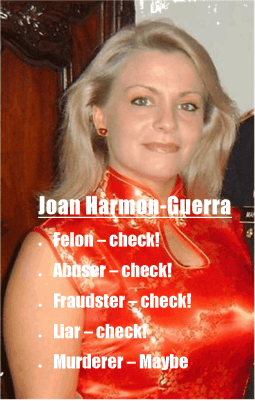 And the Army knew it. JAG officers knew all about Joan. So did involved Army Judges. Yet the Army, JAG officers, and Army Judges determined to convict Major Martin on trumped-up charges, at any and all costs because it was politically expedient and career wise… justice was jettisoned and Major Martin deposed, convicted, and sent to prison. Harmon-Guerra is still free to abuse again… The entire situation is disgusting. NCFM is filing more complaints against the JAG officers and others involved. They should be booted out of the military, lose their law licenses, and serve some prison time just like Kit. Here’s what Kit wrote sitting in his Leavenworth cell…

After two and a half months in confinement, county and federal, I have to ask the question “what is the purpose of prison?”  Is it to punish?  Is it to correct?  How are those supposed to occur by locking someone up away from their family, friends, and community?  How is this supposed to help their family by taking away the human and financial support from spouses and children?  Are we not just creating more of a welfare state?  The U.S. has 5% of the world’s population, but 25% of the world’s prisoners.  We are now the new Soviet Union, locking people away in “gulags.”

This is especially heinous when you look at what is being done to U.S. veterans.  Looking at the confinement reports and other FOIA requests you can see that Court Martials are up 550% since 2007.  Convictions are similarly growing exponentially.  Army prisoners are up from 119 in 2010 to 593 in 2014.  This is due primarily to the false sexual assault “epidemic.”  This is a politically motivated narrative, almost identical to what is happening in our universities.  This is ironic since a review of Americas crime statistics (disastercenter.com) shows nationwide rape and sexual assault is at a 24 year low.  Despite this the Sexual Assault Witch-hunt in the military has sexual assault convictions up from 2010 to 2015 from 24 to 427! This includes a threefold increase in 2015.  Currently women make up over 15% of military, but amazingly 2015 was the first year a female (at least in the recent past) committed a crime worthy of prison! There was one female prisoner in 2015 compared to 802 military men.  A fair and balanced system? I don’t think so.

U.S. Veteran men are now the new political prisoners of the world, the real expendables.  After years of putting their lives on the line for their country, and sacrificing irreplaceable family time, their country is now railroading them into prison.  Their families that also sacrificed so much are being left alone again, but now without any income and security.  That money is being given to reward false accusers.  This is all being done so that military leaders can show politicians that they are tough on sexual crimes and deserve to keep their convening authority power.  This is legal power few of them even understand.  It is the ultimate betrayal.

One day these men were considered heroes, the next day they are zeros. They are labeled for life as sex offenders and felons, usually based off of a single false allegation by an ex-spouse, girlfriend, or even a neighbor.  When things are bad and a service member is having a hard time, you can always count on the military to make them worse.  After years of working to earn rank and respect these combat veterans are now being treated like children, and guarded by children too.  Most guards are teenage privates straight out of high school and basic training.

When I was a teenage private I would have been too humbled to even speak to a real veteran such as my current brothers I am confined with now.  I was in awe of real Soldiers that had actually fought in a war.  Men who were Paratroopers, Rangers, pilots, etc.  they were like gods to me.  After 30 years and several deployments I am all of those things, what I always wanted to be.  I am one of them and proud to be so.   My military family is proud of me too. In fact, they couldn’t be prouder if I had won the Congressional Medal of Honor.

Yet here I sit, in a small cold cell.  But I would rather be here with my brothers than having to associate with REMFs such as crooked JAG lawyers, CID investigators, and self-serving gutless “leaders.”  If Americans only knew what was going on would they take the time to do something?  Would they contact their representatives and complain and demand change, or would they just watch another funny pet video online instead?  What will happen to our country as our military is transformed to appease misandric politicians?  It is no longer a defense against foreign aggression, the last resort, it is now a bastion of elitist feminism.  Who will take responsibility for its future epic failure in the next real war?  Success has many (sorry) mothers, failure has none.

My brothers are labeled rapists and abusers.  After a “thank you for your service” welcome home (something Vietnam veterans like my dad never got) they have been locked away without the same constitutional rights they risked all to defend.  They served and protected the rights of those that wouldn’t or couldn’t serve themselves.  These veterans are so dangerous that 45 of us often sit around guarded by a single teenage female private, all 4’9” and 90-pounds of her.  Most of these men are fathers of teenage daughters themselves and the funny thing is they would give their lives without a moment’s hesitation to protect these same guards.  When we must be escorted it is again by these teenage “Soldiers” that have never seen combat or have any idea what the real army was like.  Their army is one of stress cards, sexual assault training, and political correctness.

Many of them are good people doing the best they can, but they are not real Soldiers and their “leaders” know better.  They know the truth of what is happening to our veterans and yet they do nothing.  Privately they will admit it to you, but publicly they hide from it, serving evil and corrupt masters.  Like most of the inmates they think they can retire or get out before they are victimized.  Many have cheating or abusive spouses, but they know they can do nothing.  They must endure the humiliation because just like the Soviet Union or Nazi Germany, it only takes one phone call and the machine will turn on them.  The machine spares no one except the very powerful, like presidential candidates or famous generals.  The hypocrisy does not choke the machine; it grinds on looking for easier pickings.  The young Soldier, the poor Soldier, the less educated Soldier.  They are the true expendables.

When you have an “epidemic” you most show your solution is working.  When you are spending $257 million yearly to convict veterans and building $95 million prisons you have a lot of hammers.  You must find thousands of nails to justify those hammers.  It is easy to find false accusers when you have that much money to pay them off.  Everyone has an enemy somewhere. The military will find them!  If they can’t find a victim they can make some, especially if they are in the military too.  If they won’t take the carrot of benefits, then they will use the stick of interrogations and threatened charges.

It is the same for the accused.  Isolated, interrogated, and threatened until “investigators” hear what they need.  So what if they passed that polygraph, it isn’t admissible in court.  The JAG Corps knows how to suppress evidence and hide the truth.  They mentor their young to cut their teeth as TDS defense lawyers.  If they are compliant and push those plea deals they might get to become prosecutors.  If they really “play ball” and do what is necessary to win they will get to play in the big leagues.  Here they will get the special training and support of Special Victim Prosecutors.  For the truly corrupt and unethical the bright road of being a colonel and judge will be granted.  The JAG has no real oversight; it needs unethical judges to cover up the mess of their young.

So now that we have fast tracked our vets into prison, stolen their honor, left their families to cope alone, what do we do?  Oh wait, we must label them as sex offenders and felons.  Even when they have served their time we must make sure they have no possible future. “Thank you for your service!”

Since most of these inmates have done nothing wrong, there is nothing to correct.  We will not counsel them or give them hope.  What to do?  What to do? We will give them drugs!  Drugs will keep them compliant and dependent.  COL “Skittles” here at the JRCF will give you anything you want so he can use vets as lab rats for his drug studies.  The army has a long history of doing this like the syphilis experiments of the Tuskegee airmen in WWII or the nuke “training” of the 1950s.   The military will always find new younglings to sacrifice.  Those vets that actually did do something to get in here were being prescribed these same drugs that clouded their thought processes and caused bad judgement or anger to flare up in frustration.   Does all this seem too much?  Maybe that is why 22 vets a day take their own lives, almost one an hour!

Well at least you are safe while I’m in prison.  I’m safer too since my deployment days are over.  I hope your daughters enjoy fighting the next war.  I need to go the bathroom now.  I don’t mind the young female guard staring at me through the door as I go.  I wonder if there are male guards watching female prisoners?  Oh wait, that’s not a problem is it… 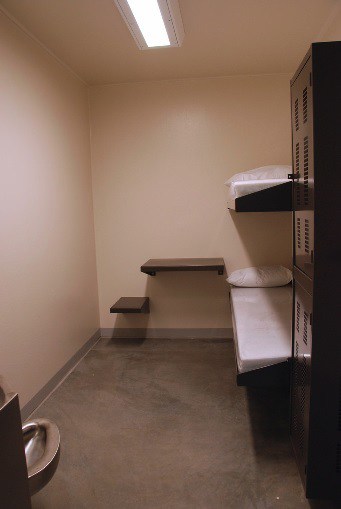 How we reward our heroes to satisfy political correctness.