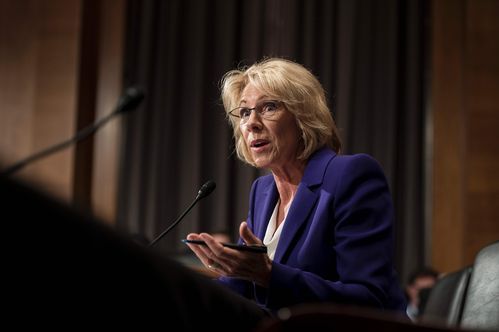 The contentious confirmation hearing of Betsy DeVos, President Trump’s nominee for Education secretary, revealed just how difficult it will be to restore a degree of fairness in how the nation’s colleges and universities handle sexual assault allegations.

Even before the hearing commenced, Democratic senators Patty Murray of Washington and Bob Casey of Pennsylvania issued a letter wildly describing campus sexual assault as “affecting millions of college students.” (According the most recent federal Clery Act data, from 2014, there were 5,178 rape reports on campus that year.) The senators demanded the new administration retain guilt-presuming policies adopted in April 2011 by the Education Department’s Office for Civil Rights (OCR).

OCR has forced thousands of universities to change their procedures in sex cases, in each case increasing the chances of a guilty finding. These procedures include the lowest possible burden of proof (a 50.01% probability) ; a virtual ban on meaningful cross-examination, long seen by the Supreme Court as the law’s best truth-finding tool; letting accusers appeal not guilty findings, a form of double jeopardy; a process so rushed that many accused students lack time to prepare a defense; and “interim” punishments before any investigation.

Ironically and revealingly, on the same day that Casey and Murray voiced their demands, an open letter issued by former vice president Joe Biden tacitly admitted that there is no evidence that his administration’s attack on due process has made college women any safer. That didn’t stop Casey from criticizing DeVos for her $25,000 in charitable contributions over the years to the Foundation for Individual Rights in Education (FIRE). Casey risibly called FIRE “radical”; his spokesperson boasted that the senator would stand up to “the far right groups determined to roll back the progresswe’ve made on campus sexual assault.”

But FIRE is neither “far right” (it’s non-partisan) nor some soft-on-rape outfit. It is the nation’s preeminent defender of free speech, due process, religious freedom, and other civil liberties for university students and faculty members — conservatives and liberals, Christian and Muslims, gays and straights — against persecution by authoritarian university bureaucrats, federal and state officials, and others who seek to stifle debate or presume guilt. FIRE has attacked OCR for its guidance on campus sexual assault, noting that only a system that treats both sides fairly can be trusted to produce the truth. That a sitting senator views this agenda with horror is deeply troubling.

DeVos should be proud of her contributions to FIRE. And, at the hearing, she correctly informed Casey that it would be “premature” to say she would do his bidding and uphold her predecessor’s unfair procedures.

We hope her testimony was a signal that, as Education secretary, she will dismantle the Obama administration commands that universities degrade due process. Instead, she should encourage colleges to channel sexual assault accusations into the criminal justice system, where they belong, while making sure that schools provide accusers with needed academic, counseling, and other accommodations.

On paper, achieving this task merely requires a stroke or two of the pen, revoking illegally adopted Obama “guidance” documents and ordering officials to enforce Title IX with an eye toward protecting due process.

In practice, restoring due process on campus will be much more difficult to accomplish. OCR’s new enforcement director — who assumed her position two days before Trump took office, in what can only be seen as an attempt to use the bureaucracy to sabotage any change of policy — is Harvard’s former Title IX coordinator, Mia Karvonides. She oversaw a Harvard process so unfair that it earned the public condemnation of 28 Harvard Law School professors, including leading liberals and feminists.

With many campus sex bureaucrats around the country reflecting the Karvonides approach, accused students increasingly have been forced to turn to the courts to achieve justice. An Amherst student did so after his college refused to consider exculpatory text messages from his accuser. For an Occidental student, a lawsuit was the only path to vindication after his school ignored his accuser’s texting a friend her plan that “Imgoingtohave sex now.” A James Madison student sued after his school allowed an appeals board to use evidence that he never saw — and that turned out to be inaccurate — to overturn a well-justified not-guilty finding by the university’s original panel.

Given the increasing need for the courts to check campus attacks on due process, the new administration should appoint judges who will enforce due process rather than blindly deferring to campus sex bureaucrats.

The larger task of protecting innocent students from the thousands of campus and federal sex bureaucrats who have been put in place, and from the egregiously unfair rules that they have adopted, and from the ascendant culture of presuming guilt, calls for sustained effort not only by the new administration but also by Congress, state governments, academics who care about civil liberties, trustees, parents, alumni and students.

KC Johnson and Stuart Taylor Jr. are co-authors of a new book, The Campus Rape Frenzy: The Attack on Due Process at America’s Universities.

You can read diverse opinions from our Board of Contributors and other writers on the Opinion front page, on Twitter @USATOpinion and in our daily Opinion newsletter. To submit a letter, comment or column, check our submission guidelines.