Dead men tell no tails, but their silence cries out from the grave at the gross distortions of reality propagated by feminist “Her-story” (what passes for feminist history).

On a wall in an office of a prominent feminist organization hangs enlarged photos of suffragettes marching, parading and protesting for the right to vote for women as shown in the movie, “The Red Pill.”

In the movie “Iron Jawed Angels” a scene from that recreated history shows women suffragettes protesting outside the Wilson Whitehouse for the right to vote.  In historical fact, that event took place at the same time thousands, or tens of thousands of men were being mutilated, or killed, for America without the right to vote in America.

Also in the movie “Iron Jawed Angels” is a scene showing a hunger-striking suffragette being force-fed through a tube run down her throat.  Fortunately for the suffragette, she lived, which is more than can be said for thousands, or tens of thousands of men who died, or were mutilated, while serving their country in WWI without the right to vote.  But there’s no need to mention that in history, or “Her-story,” because dead men tell no tails, and apparently when men die for their country without the right to vote it isn’t worth mentioning in Western college curriculums, or Western media at large.

Having been one of those who arrived in a combat zone without the right to vote in my country (America), this is one issue that has proverbially “stuck in my craw” so I’ve dug deeper.  Records are laborious to pour over so I only selected one state, California and looked at the name and date of death of every California service member who died in the Vietnam Conflict as recorded on the Vietnam War Memorial website. http://thewall-usa.com/

Of the more than 4,000 California men who died in Vietnam, whose names appear on “The Vietnam War Memorial Wall,” approximately 42 percent died for America without ever having the right to vote in America.  And that’s after adjusting for those men who were under 21 years old and died for America after the 26th amendment was passed.  As it turns out, California is the state with the most Vietnam War deaths, and the number of men under 21 who died (not adjusting for passage of the 26th amendment) appears to be the same number as for the entire U.S.  In other words, it appears very likely that 42 percent of the more than 58,000 men whose names appear on the Vietnam War Memorial died for America without the right to vote.  Eight women’s names also appear on the Vietnam War Memorial Wall, but they were all old enough to vote at the time of their deaths.

Going further back, I researched the 12 men who raised the American flag on Iwo Jima.  Of those 12 men, four later died for America without ever having the right to vote.

Additionally, while watching a UK documentary on WWI one evening, the narrator said that approximately 500,000 UK men who died in WWI were not land owners and were therefore not eligible to vote.

The sad reality you’ll likely never hear on any Western college or university campus, or in any media source, is that it’s been men whose voting rights were most oppressed in the 20th century as evidenced by all the men who were required to give their lives for their countries, but were denied the right to vote in their countries.

A lot is still being said about alleged oppression of women as it regards their numbers amongst the ranks of elected officials in governments, but once again we’re being fed half truths, since women have long been the majority of the voting electorate, and as a voting power, they’ve been the most influential in electing officials – officials who will represent women’s interests.

Apparently, the majority of the news media, and the entertainment media, know this too, and pander to where the true power lies, and has lain for a long time – women’s votes and purchasing power.  Yes, “women also control 88 percent of all purchases.” http://tinyurl.com/hwr4l7f  …so where do women get all their money if they only earn 76, or 77 cents compared to every dollar a man makes?  Hmm, that’s a glaring topic for consideration, but don’t expect feminists to ever address it. 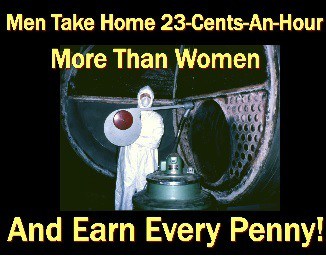 Apparently the old propaganda adage, “If you tell a lie big enough and keep repeating it, people will eventually come to believe it.” is alive and well in 21st century America. Apparently, that Goebbelsism has become a guiding policy in modern feminism’s telling of history, or Her-story, where neglecting to tell the truth, the whole truth, and nothing but the truth is just too inconvenient to fit in with feminist propaganda.

If not outright lies…