NCFM NOTE: Harry Crouch, NCFM President is an Adviser and supporter of Save Our Heroes (SOH), a new nonprofit organization dedicated to helping members of the military who careers and lives were destroyed by a false allegation or wrongful conviction of sexual assault and related offenses. Mario Jeffers’ story, like many others, shows how military men are being destroyed for political correctness absent any evidence against them. In fact, in may instances one or more civilian and military agencies have cleared them of wrongdoing. If you know of any active duty military or veterans who were falsely accused please contact SOH at  http://www.saveourheroesproject.com/contact-us.html. Please visit their website, donate, help them help other heroes persecuted by political correctness. 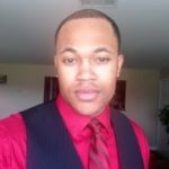 No Evidence to Support a Court Martial: The Wrongful Conviction of Army Sergeant Mario Jeffers

Mario Jeffers, a divorced father of two, had consensual sex with a female Soldier at his house one night, other people were there and there was no commotion. The local police determined that no crime had occurred and the female admitted in a videotaped interview that the sex was consensual. Civilian prosecutors did not file charges (Detectives Summary Below).

A year later this same female, a single Soldier and mother, wanted to move closer to her home and avoid an upcoming deployment with her unit. As per the army’s sexual assault victim policy, a claim of sexual assault mandates an automatic reassignment to the duty station of the “victim’s” choice along with monetary compensation and other benefits.

Army CID opened a new investigation for the crime already cleared by civilian authorities. They did this despite the fact that a CID agent was present when the accuser was confronted earlier by a civilian detective and exposed as a false accuser. At the Army Article 32 (Preliminary Hearing) the Investigating Officer found no evidence to support a Court Martial (Report Summary Below).

Army Special Victim Prosecutor (SVP) Major Jacob Bashore and Captain Banti prosecuted Sergeant Jeffers anyway with judge Lieutenant Colonel Calarco presiding. As standard procedure, key evidence such as the taped confession were excluded under military rules of evidence (MRE). Even though the “victim’s” story changed three times and she was shown to be lying, LTC Calarco found SGT Jeffers guilty and sentenced him to 6 years in Leavenworth with a dishonorable discharge. Mario Jeffers is now a felon and sex offender for life.

How is it remotely possible that a military prosecutor, in this case Major Jacob Bashore, be so void of conscience and ethics that he would knowingly prosecute an innocent man? How is this allowed in the military? The sad truth is it is happening every day. Please support the non-profit organization Save Our Heroes. http://www.saveourheroesproject.com/

If you would like to write to Mario Jeffers and offer him support his address is: 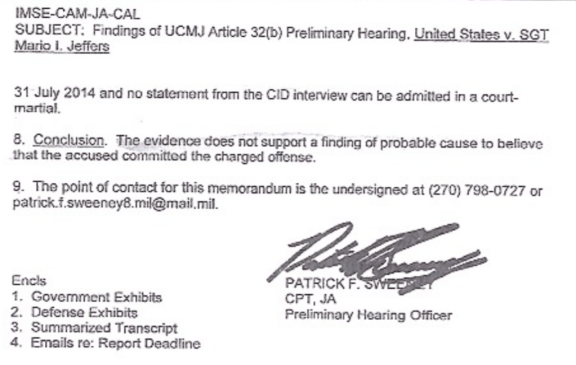 No Evidence to Support a Court Martial: The Wrongful Conviction of Army Sergeant Mario Jeffers