NCFM Member Nelson Otto on “Privilege, Not for Men Only 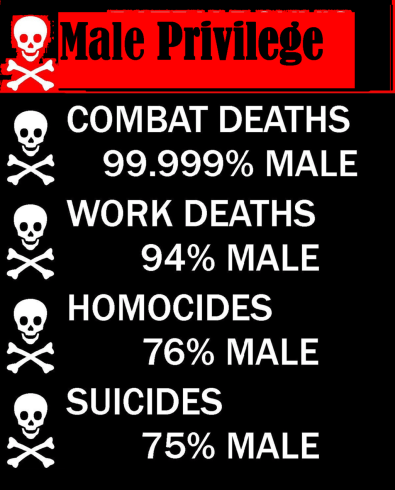 Click on male privilege to become a member of NCFM or give.

Privilege, Not for Men Only

Male Privilege.  These two words are often stated as a given or fact, that men have advantages given to them just by virtue of being male, white males.  But, we might ask, compared to what?  Why haven’t we heard about female privilege?  Are there are things not being said?  Do females also have privilege?  Would we then think and feel differently about privilege and men and women?

Let’s start a dialogue on this topic.  Since we’ve heard almost entirely of male privilege, I want list some of the privileges females have to offer balance to the topic. First a definition from the American Heritage Dictionary, “A special advantage, immunity, permission, right or benefit granted to or enjoyed by an individual class or caste.”

This list is not comprehensive; there are numbers more, but demonstrates the reality of female privilege. Toni Airaksinen, a columnist for the Columbia Daily Spectator and student at Barnard (women’s college) writes,” Feminism didn’t just make me blind to the truth about men—it made me actively resist learning about it…Once I took off my feminist blinders, I realized that I was fabulously privileged.”  We worked to help women get some of the privileges men have.  It is now time to acknowledge female privilege and help men benefit from privileges women and girls have long received.  Again Toni Airaksinen, “When men lose out women lose too.  Many of these are fathers, husbands, and sons.” The tear in the social fabric when a community loses a man has devastating effects in many lives. Hopefully we can work together to do this and we can all win.

Why isn’t this happening? Asserting male privilege is another way of stating that women have disadvantages, are victims, are being oppressed by men and has been used to help gain political advantage.  Albert Ellis, the well known psychologist, states, “to blame others means you get angry or hostile towards them.”  Taken further, male privilege defined and interpreted in this way, has led to anger and disrespect for men even to the point of hatred, dehumanizing and demonizing.  How often have we heard the words, angry feminist? There is a lot of energy and power in anger. It can even be addicting, driving a need for regular fixes, which the strong ideological advocates regularly provide. If you are not listening to the whole story, is anger justified and legitimate? Would you even be angry?  Chances are, hearing both sides would lead to greater empathy and understanding by both men and women.

Identifying and defining privilege is very similar to identifying and defining a gender issue.  A privilege for men is an issue for women and vice versa.  An issue doesn’t have life, isn’t seen as significant unless there are feelings about it, emotions.  Male privilege is felt by women as a negative emotion, deprivation, vulnerability, hurt, pain.  Female privilege when it is even identified and articulated, which it rarely is, does not raise such negative emotions in men.  This should be no surprise since men are not so in touch with their feelings and are loath to admit to any weakness.  “Strong men” feel little pain or admit to it.  Just hold it in. This is a major reason why we hear so little about men’s issues and its concomitant, women’s privileges.

For the past 40 years women have had by far the dominant voice in gender issues.  They have selected, chosen what to emphasize, defined, interpreted, publicized, politicized and repeated their issues many times, highly controlling the message.  They are very effective. Some have called it dominant, authoritarian feminism, unbridled idealism. Women’s control of this issue has resulted in millions of government and private dollars to fund programs and agencies helping and promoting women and girls. Advocates for men and boys are nearly silenced in the established political structure.  They have gotten virtually nothing; they are on their own.  This has resulted in major distortions in our perceptions of gender, a narrow, parochial view. The constant verbal and psychological battering has a negative effect on the lives of men and can lead to an increase in dysfunctional behaviors and compromised lives. The playing field is in great need of being leveled, and a broader, open-minded, more inclusive, systems oriented, holistic, democratic and collaborative approach used to bring positive change.

There is a lot of power in being a victim, a solidarity of victimhood, the belief that some external enemy is the cause. This leads to what forensic psychologist Reid Malloy calls vicarious identification, the moral outrage that comes from the belief that my victimhood is connected to the larger victimization of my group. But Ross Douthart in “Checking Charlie Hebdo’s Privilege” states, “Almost every official hierarchy of victimhood tends towards some kind of blindness or partiality…even the well meaning can lose their way entirely.” Daniel Kahneman in Thinking Fast and Slow, ”we know that people can maintain an unshakable faith in any proposition however absurd when sustained by a community of like-minded believers.”

It is well known that if something is stated often enough it becomes seen as fact.  This then leads to acceptance as common knowledge and common sense, even though added perspectives would be useful. Quoting Daniel Kahneman again, ”familiarity is not easily distinguished from truth.  Authoritarian institutions and marketers have always known this fact.” Or from Daniel Patrick Moynihan, “You’re entitled to your own opinions but not your own facts.”  Facts must be kept separate from opinions.  It is important that the whole truth be told, that both men and women be heard.  Conclusions drawn when only one side of any discussion is presented are on very shaky ground. Edward Lottermen, “There may be cases where I might make bad decisions because important information is missing.”  This is one of them. He points out the factor of “path dependence’’ is also in effect ”while one path may not necessarily be superior to another before a choice is made, that choice will influence future paths and exclude others.”

It goes against the grain for men to acknowledge that women have privilege and have strengths or that men are in a disadvantaged, weaker position.  Admitting to a weakness is traditionally not what men do.  Weak men are shunned and disrespected by men and women alike. Have you had such thoughts while reading this?  We don’t want to hear about it.  We’re not likely to hear men talking about their disadvantages and weaknesses.  “Real men” don’t complain; it’s not manly.   It is both individual and collective macho.  Aaron Kipnis says, “it violates a basic social contract against men acknowledging their pain.”  Lisa Zeidner quoted Laura Kipnis in the Washington Post, “men are considerably more vulnerable than they feel comfortable revealing and more vulnerable than women want them to be.”  Men are eager to help the damsel or damsels in distress. The opposite not so much.  Women have significant influence in shaping men’s behavior by selecting strong, successful doers as mates. Men are very sensitive to what women want.   Both men and women select doers as leaders.

Saying that women’s privilege (men’s disadvantages) isn’t that big a deal, important or significant is to minimize and trivialize it, a form of denial.  It reinforces men’s silence and belief that men are to be tough and strong.  Consider carefully the impact each of the privileges listed earlier have on the individual, the family, on the community and the country.  Most of these privileges are subjects for research into the impact of each of these on men’s lives and for the ripple effects on others.   Keeping our minds open and challenging these beliefs can be unsettling; they are fundamental to our being and part of who we have come to be.

For women, particularly women’s advocates, admitting to advantages and strengths undermines their claims of oppression and victimhood and how that has resulted in further advantages.  Why would anyone want to jeopardize or possibly give up some of the advantages they worked so hard for?  I would start by appealing for equality, the clarion call of the women’s movement.  In this case, equality of inquiry and equality in participating in gender dialogue.  This is where equality begins.  Next I would state, millions of women and girls have men and boys who are significant in their lives and would very much like to have them become healthier psychologically and physically and have more productive and fulfilling lives to correspond to the gains that women and girls have made.  Third, labeling women and girls as victims presents them as weak and in need of protection and help from the government.  This constant message of weakness goes counter to the concept of women as strong and the equal of men.  Katie Roiphe states, “Among other things, feminism has given us this.  A new stock plot, a new identity spinning not around love, not marriage,— but passivity and victimhood.  This is not what I want, not even as a fantasy.”  And fourth, thinking of people (the other) as less than human and treating them this way has the pernicious effect of dehumanizing the purveyor of such vitriol, a self-inflicted wound generating a need for more and more defensive blaming and anger towards men. When we diminish others we diminish our own humanity. There is a better way.  Gender peace, respect, support and coöperation.

These are very powerful reasons why we have heard mainly one side of privilege.  How can this pattern of focusing on one side of privilege change?  When will it change? To begin, both men and women need to come to the table.  A big issue is for men to understand their feelings and find the courage and willingness to express them.  We need to encourage men to do this and avoid shying away from men who do so.  Listening can be difficult, even raising unacknowledged fear by both men and women, but it is essential to communication and understanding.  Women must be willing and have the courage to hear what men say and not reject them for expressing vulnerability   ̶   and to acknowledge that females have privileges.  Finally, just as men have shared their traditional power, the call is for women’s advocates to share their nearly total control of the gender message with men’s advocates.

Truth binds people together and minimizes mistrust and division.  Alan L. Egly writes in a sermon, Ethics: How to do it, “The bane of ethics is incompleteness and incompleteness is a product of un-asked questions.”  Or from Maguire, “Too often we skim the surface of reality, observing and receiving those messages that are agreeable and sometimes we do not understand the true nature of reality because our psychic defenses are so strong.”

Reconciling these forces is a tall order but taken in steps can be achievable if there is a good faith, respect and a willingness to do so.  Cathy Young writing in the Washington Post states it well, “Our fractured culture is badly in need of healing—from the gender wars as well as other divisions.  To be a part of this healing, feminism must include men, not just as supportive allies but as partners with an equal voice and equal humanity.”  Also from Jed Diamond, “The more women love and support men in their lives, the more men are motivated to love and support them…The results are worth it.”  It goes both ways.

Ethics: How to do it – Alan L.  Egly (sermon) Unitarian Universalist Congregation of the Quad Cities

The Morning After – Katie Roiphe l993

Privilege, Not for Men Onl