NCFM Member Nikita Coulombe, We Think Women Are Better People, But They’re Not

We Think Women Are Better People, But They’re Not

… and no women ever invented life-saving antibiotics, electricity, or the printing press. Seems women haven’t invented very many things at all — men are listed as the primary inventor in more than 9 out of 10 patents, and the top patent classes where women are the primary inventor are travel goods and personal belongings, jewelry and apparel. Who is sexist here: Michael Moore, me, society or mother nature? If you answered “all of the above,” click here to exit this article.

In The Myth of Male Power, Warren Farrell remarked, “feminism suggested that God might be a ‘She,’ but never suggested that the devil might also be a ‘she.’”

In a revealing Pew survey, both men and women thought women are better people than men — more compassionate, honest, intelligent, outgoing and creative. The sexes were tied when it came to perceptions of their work ethic and ambitiousness. The only thing men were thought to be better at was decisiveness. Men were also rated as more arrogant and stubborn while women were rated as more manipulative and emotional.

Why do we believe men are of lower moral caliber than women? There are many factors, no doubt, but I want to focus on a couple ideas not often discussed: men may appear to be less moral than women because they often take on more responsibility — which increases the chances of mishandling responsibility and putting others in harm’s way; and because of how men and women reward each other, men have to do more to impress the opposite sex and therefore have to take more risks — which means breaking some rules, making some rules, and then enforcing those rules.

In King of the Mountain, which analyzes the nature of political leadership, Arnold M. Ludwig writes that of the small percentage of 20th century leaders that were women, “most seemed just as willing to risk their lives and personal freedom for their political convictions,” yet most spent less than a year in office. “What attests even more to their being the equal of their male counterparts is that several had administrations that were just as corrupt.” One prime example is Dilma Rouseff.

On an individual level, women are about as likely as men to be aggressors in intimate partner violence, yet there are little to no resources available to male victims of domestic violence (see here, here and here). Boys are also more likely than girls to experience “completed sexual abuse” and are later more likely to commit suicide after sexual abuse (see here and here). And women get shorter sentences than men for the same crimes, and are twice as likely to avoid incarceration if convicted.

One of the reasons why women can get less punishment is because of the “halo effect” — we look more innocent and are perceived as less threatening. For example, people with softer faces are less likely to be found guilty of intentional crimes, but more likely to be found guilty of negligence. And in one fascinating experiment, the mere presence of an unfamiliar male (or his hormones) elicited a stress response in rodents, whereas the presence of a female did not. There are also more social systems in place that support women and especially single mothers, such as welfare, making it seem as if a woman must have really been in need or in danger if she committed a crime.

Ever wonder how a female version of Lord of the Flies would play out, where everyone has a halo but still needs to eat? Here are a couple of examples of what happens when women are under the same levels of stress as men:

In Stanley Milgram’s classic 1963 obedience to authority experiment, the original participants — all male — “shocked” another participant (really a confederate) when he got a wrong answer on a simple test, with each wrong answer increasing the number of volts. In that scenario, 65 percent of the male participants went all the way up to 450 volts (the highest setting). Later Milgram conducted variations of the experiment; when women were participants, 62 percent of them escalated the shocks to 450 volts. 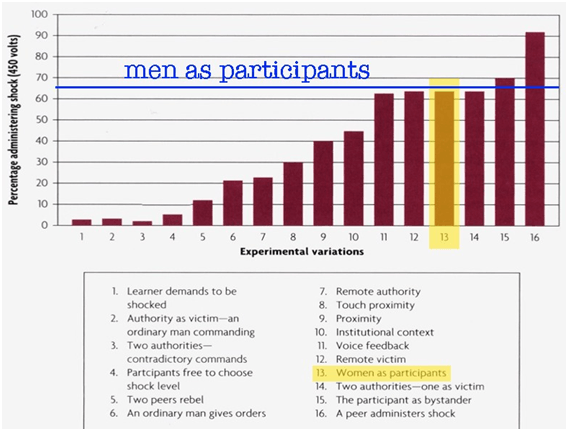 Interestingly, in recent good samaritan experiments, the same number of men and women walked by people needing help. And in a recent variation of Soloman Asch’s conformity experiment, women agreed with group judgments at higher rates than men.

If you don’t think these experiments reflect reality, consider that in Germany since WWII, just 3 out of the 3,700 women who worked at Nazi death camps were investigated for the roles they played as collaborators to mass murder. A couple of the most brutal guards, Charlotte S and Gisela S, will never be prosecuted because they are frail old women.

Other studies have revealed that men are more likely than women to reconcile with their opponent after conflict, are more comfortable standing out from their same-sex peers, have greater tolerance of same-sex peers, engage in less social ostracism, and are more willing to resolve conflicts with same-sex peers.

In a hidden camera experiment, no men gave in when underage teens asked them to buy alcohol while women were more lenient.

Throughout history women, unlike men, did not have to take as many risks or necessarily cooperate with others to continue their line. Through sampling the genetics of various populations alive today, biologist Jason Wilder determined that humanity’s ancestors are roughly 67 percent women, and 33 percent men, indicating some men were able to have children with multiple women, but most men didn’t have any children at all (see here and here).

Men are expected to do good on behalf of society; men doing good is really the expected average. Men fulfilling the foundational requirements of an economy or society (raw material extraction, fabrication, movement, management, regulation creation and enforcement, power generation, utility services and maintenance, and public safety) are what allow us to progress civilization. To discredit the very population that provides that foundation is a hubristic action on the part of society, and shows a patent level of socially accepted entitlement. This is a great way for a social contract to unravel and unwind itself.

In television and movies, we make men wear masks when they do good things so their contributions to society are anonymous and therefore they don’t get to be on the “good person list.” Batman and Bruce Wayne, Spider-man and Peter Parker, Superman and Clark Kent, the Teenage Mutant Ninja Turtles, James Bond — all of them live double lives. If they weren’t wearing masks and we had to acknowledge their heroic deeds, it wouldn’t be as easy to exploit their disposability.

Perhaps we’re afraid that if we let men value their lives as much as women value theirs, society would fall apart. Imagine Batman tearing off his mask singing “Let It Go,” like Elsa in Frozen? How well would that work out?

It is largely men who have built civilization. And still today, men make up the majority of the workforce, and work longer hours than women. But we don’t like to give them credit for those contributions. As Chris Rock hilariously points out, “Women need food, water and compliments… and your daddy makes sure you thank your momma for everything… Nobody ever says, ‘hey Daddy, thanks for knocking out this rent; hey Daddy, I sure love this hot water; hey Daddy, it’s easy to read with all this light!’”

While it’s true that male risk-taking leads to men comprising the vast majority of serial killers, bank robbers and school shooters, male risk-taking leads to the vast majority of our inventors, explorers, jazz musicians, and CEOs. Male risk-taking also gives us heroes who risk their lives saving others, such as firefighters — 96 percent of whom are male and 7 out of 10 of which are volunteers (yet we can’t acknowledge them as firemen), police officers — 7 out of 8 of whom are male (not policemen), and military service members — 5 out of 6 Soldiers are male and, until recently, men filled 100 percent of combat roles.

Instead of examining the roots of crime and success, however, we point to crime as proof men are bad and point to men’s accomplishments as proof they are oppressors — they can’t win!

This idea of which sex is better is a false dichotomy because in the end, we both need the other. To ask who is better, who has done more, doesn’t benefit us at all. The reason I wrote this is to give men more credit where credit is due. When society thinks that men are automatically bad, which is now becoming institutionalized with forced “toxic masculinity” classes across campuses, we need to examine whether or not things are really so black-and-white. Ultimately, we (society) need to stop painting men as the enemy, recognize there’s good and bad on both sides, and get the good on both sides to start working together.

We Think Women Are Better People, But They’re Not