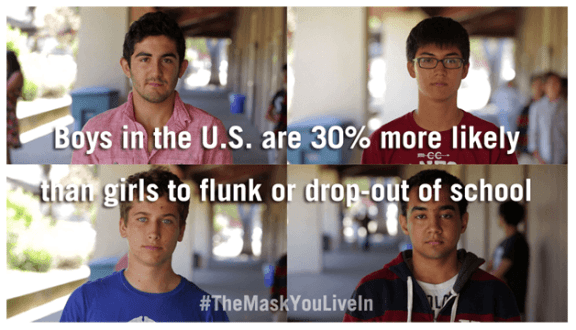 The Mask You Live In

A college professor and close friend teaches a course called “Masculinities,” which claims to explore the topic in depth. Since the subject of challenges facing modern men is a favorite of mine, nothing could stop me from diving deep into the material. I began with the teaching aid developed by leading-edge researchers: a slick and tightly edited documentary, The Mask You Live In. It catalogued the experiences of boys and young men as they struggled to remain true to themselves while negotiating American society’s narrowly defined notions of masculinity.

For us males, discovering our masculine selves when we are young can be challenging. When I was a boy, I experienced humiliation, teasing and bloody fights on my uninformed journey to manhood. Hence, the prospect of a new curriculum excites me; after four decades of supporting the women’s and gay liberation movements, it seems like educators may finally be taking the need to address male issues seriously. By doing that, they can help destroy the inhumane school-to-prison pipeline–promulgated by public school systems–that many boys fall into. “The Mask You Live In” seemed to hold great promise and offer hope for our future.

Sadly, that is not the case. The documentary begins with images and news reports, interwoven in a video collage of mass shootings, young boys committing suicide, gang rapes of college girls, and individuals being violently targeted for fun. After only a few moments, it is made clear that these acts reflect toxic masculinity. Warning: Unlike many college students whose minds have not been trained to see through such propaganda, I recognize it for what it is: an extension of the unfair lens associated with most popular social theories. It is a biased stew emanating from the process-oriented minds of feminists, incorporating such notions as rape culture and the white male privileged patriarchy as seen from a non-male perspective.

The perspective of the documentary sets me immediately on edge. Based on my own research and analysis, it is not patriarchal males who control the levers of domination and control; rather, the culprits are the wealthy oligarchy, of no particular gender or race. This group of one-percenters employs the vast resources at their disposal to further enrich themselves and exert their will through ownership of whatever matters, relentless political influence and their ability to corrupt the system by spreading money around.

Admittedly, I saw some hopeful glimmers after watching the film four times, but they were never fully developed into tools or methods that might help boys and men. The warm embers are never given the oxygen they need for high octane combustion. Talking about a boy’s pain or anger “behind the mask” is a good starting point, but it only scratches the surface. And while I absolutely loved the man who taught himself to coach the individuals he came to know–a skill all of us should learn to use–the documentary clearly falls short.

Warning: In many ways, the movie simply does not connect with the essence of genuine masculinity.  Among other things, it fails to establish an adequate link between what boys do and why. Below are six unsafe assumptions about males it seems to rest on that are worth mentioning:

It also makes incomplete and false assertions. Warning: The documentary maintains that male don’t share feelings as an outlet like girls do, without noting that many reduce emotional stress through physical workouts. It doesn’t make reference to the fact that men and women process emotions differently, or that the former tend to be results-oriented while the latter are people-interaction-oriented. There’s a timeless narrative about a couple lost in the city, where a male is studying a map while the female asks somebody on street for directions.

However, the film fails to take things one step further and explain how boys can be coached to navigate childhood bullying or the treacherous realities of surviving up to and throughout adulthood. In many cases, especially in some more disadvantaged locales, they are left on their own to navigate a survival-of-the-fittest ladder with nothing more than their wits and abilities. Warning: Without fully addressing both the concerns and the solutions, the film offers little in the way of assisting boys in discovering genuine masculinity.

Warning: In reality, such perspectives can leave viewers with the false and dangerous notion that dominant men cause domestic violence and that the victims are invariably women. While most of us will probably agree that our society as a whole is much too violent, evidence suggests that the problem is different than many think. Women in same-sex relationships experience more than twice the extent of physical and sexual abuse that heterosexual couples do. If women’s studies programs, for example, were serious about reducing violence, they might want to study the petri dish in their own backyards.

Sexual assault and rape are a social construct. Warning: When it comes to rape, I question why the documentary did not leverage the fact that men are raped, physically assaulted, attacked and killed at much higher rates, but masculinity protects them from seeking safe spaces or turning into traumatized victims. Women can learn this male specific virtue and live more courageously.

The documentary also discusses pornography, sexual attraction and the fact that male and female interaction could not be more out of sync. This is “proof” that the sexes are nowhere near “equal.” Warning: Conflating the word “equality” to imply that men and women have the same emotional drives, instincts and behavioral reactions is wrong and perilously harmful. The feelings that men have and express toward women–appreciation, adoration, desire, lust and objectification–are seen as harassment and misogyny. Warning: Somehow, natural male interest in the opposite sex has been transformed into an ideology where men believe they are superior, entitled, privileged and deserves sex.

Many women don’t seem to understand our instinctual behavior, preferring instead to reprimand us for glorifying sexual conquests, or for being pick-up artists or womanizers. Many are quick to toss the male sex drive into the misogyny bucket, simply because it is not like their own. Some also demand that those they date follow a strict set of rules, in an effort to harness the wild stallion of innate male nature. The rules of monogamy are often enforced with power, dominance and violence by women.

But such notions are wholly misguided. In fact, by studying gay men–many of whom, ironically enough, have been ardent female rights supporters–women might realize that their understanding is at odds with reality. In some parts of gay culture, for instance, young males experiment with exhibitionism, cruising pickups, multi-racial lovers, fetish affairs, anonymous encounters, kink and role-playing, and multi-partner intimacy. Through sexual physicality, men can discover inner boundaries, self-esteem and love.

Moreover, in some situations, gay men grope, catcall, make lewd comments and touch one another using behavioral consent on a regular basis, which doesn’t sound at all like they are seeking to dominate and demean each other. Warning: Again, the notion that male sexual behavior is bad because it is different from that of a female is another example of how the film’s message is like a woman publicly spanking and scolding boys for natural masculine urges.

However, when young males are placed in private or charter schools for boys, they tend to thrive, readily engage with others in conversation, and take to such activities as singing in the choir, playing in the band and investigating their feminine sides, largely because they are not being shamed in front of females or don’t feel obligated to “peacock” for the girls.

Simply put, the public school system’s politically correct but misguided implementation of mindless diversity and a white-washed curriculum, as well as a lack of resources tailored to the needs of each child, is the root cause why many boys, especially those of color, fall by the wayside and experiment with alcohol, substance abuse, gang affiliation and criminal activity. But by rethinking the obsolete approach and considering the needs of young males in their formative–and most vulnerable–years, helping them to express their inner virtues, we can tackle what appears to be an intractable problem.

By focusing on constructive solutions rather than self-serving propaganda and destructive recriminations, the now wasted efforts of women’s studies programs and so-called equal opportunity initiatives could be focused instead on developing programs that could help women work through these and other unhealthy emotions. These females could then be free of the tension that is holding them back from enjoying a more fearless, strong and independent life.

As I’ve gotten older, I’ve used what I’ve learned to amplify that one-way feminist lens and see what I believe is a far more diverse and inclusively humanist view of our world. While I applaud the film’s attempts to explore what has become an urgently important  issue, as well as its seemingly well–intentioned portrayal of the struggles of boys–whose needs have largely been ignored and unaddressed–I am disenchanted.

Warning: In truth, the film ends up validating the women’s studies perspective about the masculinity they fear. Rather than leading to the kinds of reforms that will actually help our young people to better themselves, this creative effort will likely serve as a framework for introducing more laws and policies designed to protect women by giving them greater dominance and control over men.

Most likely, the divisive fallout we have already seen will grow much worse. In Nottinghamshire, England, for example, authorities are beginning to record misogyny, which includes everything from verbal comments and wolf whistling to unwanted physical approaches, as a hate crime. On college campuses in the U.S. and elsewhere, there are growing efforts to censor speech, individuals and events, often at the expense of white heterosexual males. While bigotry, sexism and racism are supposedly frowned upon, that is not the case with what has become a despised group.

I am saddened that men do not have the same treatment and opportunities that are available to others. Why aren’t there male studies programs, for instance, that can research and evaluate relevant issues and leverage genuine masculinity to lift up those of our gender. We are gifted machines, bestowed with attributes and abilities that can help us move mountains. Just as men built the pyramids of Egypt and other great wonders, we hope to continue to harness the world around us in a diverse and inclusive way.

I know my professor friend is an open-minded individual and he will not hate me for my views. Unlike many of those who have been dominating the conversation on campuses, in the media and elsewhere, we respectfully share each other’s insights in an effort to move all our lives forward.

Tim Patten has published the handy investment guide: MGTOW, Building Wealth and Power. He also wrote WHY I CHEAT – 11 campfire stories for men’s ears only. Both books are a celebration of masculinity and pay homage to the modern men’s liberation movement. Patten previously published a novel about establishing gender equality in professional sports, Roller Babes: 1950s Women of Roller Derby. His coming out biography is titled My Razzle Dazzle and published under the pen name Todd Peterson.

The Mask You Live In