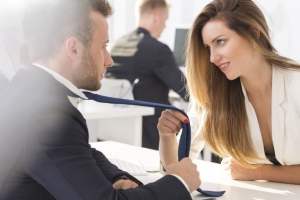 It is time to talk about a taboo subject: our male libido. More specifically, it is time to discuss how this natural trait exposes us to manipulation by females employing seduction and superior communication skills to ensnare and lead us into compromising situations. Despite having an extensive and in-depth history about males – chronicled by men – it is clear that we do not fully understand masculine sensibilities and vulnerabilities. But this must change. We need to learn more and protect ourselves against the Achilles heel of susceptibility to femme fatale flimflammery.

The modern men’s liberation movement is focusing on burnishing our individual identities and self-esteem. We must no longer permit females to take advantage of us because we are hypnotically attracted to them and distracted from our own objectives. Sadly, most of us, depending on age and experience struggle to contain the sexual urges and inconsequential arousals that women readily stir within us. Meanwhile, our feline counterparts seem to revel in how easy it is to dominate us, as well as our pathetic submissions to primal desire. They disrespect us, rather than working with us for the greater good.

American’s power-wielding women spend over $62 billion a year to enhance their looks, outshine any other women they view as a rival, and entice the opposite sex, all in the name of gaining some advantage. They use makeup, perfumes, hair extensions, clothing, and even big butts to hijack our attentions and ambitions. Unfortunately, many men don’t see through this charade. They are so visually regulated that they can’t help but be captivated. If, for example, she accentuates her cleavage by adjusting her attire, the typical male brain immediately whirs through a web of sexual possibilities.

In that moment, a woman can exert full dominance and power over a man, turning him into little more than a trail-sniffing dog. With a sensual smile and a flick of her hair, she can latch on to the whole of his constitution, and can then blind him even further with her boobs and ass. Young or old, most men are soon transfixed, mouths hanging open, searching for signals of a sexual go. But like the low-rent stripper seeking silver for sex, she is simply luring him in with powerful bait. She preys on his masculinity for her ends and means, not his.

Simply put, she is disrespecting him as a man and as a person. She is using what is effectively a form of aggressive sexual assault to gain something for herself. While it might be for something relatively innocuous, such as getting help in moving a heavy object or grabbing something out of reach, or perhaps paying for a meal, there are any number of things she may want from you. It is not an exchange based on equality and fairness, but one founded on dominance and humiliation.

Consider for a moment the image of a woman who saunters up to you with a big smile. Think about how you might respond. Do you feel a rising swell of sexual attraction? Imagine she lightly grabs your arm and rests her head on your shoulder. Do you experience a powerful boost to your ego? How about if she raises her head, picks a bit of lint off your shoulder, and asks you for a favor, such as “Can you drive me to the post office and back?” At that moment, how hard will it be for you to resist?

While these exchanges seem innocent enough, the fact is that they all represent examples of men being objectified or taken advantage of for somebody else’s benefit. Sadly, most men are subjected to this kind of systemic sexism and abuse on a regular basis. The fact is, regardless of whether the person being targeted is male or female, coercion or unwanted touching without consent both constitute forms of assault.

In many cases, the transgression escalates to the point where it becomes moral or sexual abuse. One survey found, for example, that more than 43% of young males have been coerced into unwanted involvement, including sex, with a female. While this is undoubtedly a form of rape, many men don’t view it as such. Their minds, bodies and souls have been surreptitiously manipulated, leaving them in a state of delusional entrancement. On top of that, they have been conditioned not to complain and to shrug off emotional injury. Meanwhile, many women joke at our failure to grasp the gravity of the situation.

Even those men who might, in theory, seem to be somewhat immune to such machinations can fall victim. Most of us have probably seen alpha-male friends, CEOs, political leaders and other tough individuals who bow down and take orders from a spouse wielding moral authority like a club. But when we see this man lower his head, deflate his chest, and succumb to the manipulation like a battered mutt, we can only glance away and be disgusted by the emasculation that draws him from his own respectful needs.

But things don’t have to be this way. We can end this subjugation to feminine power with a new and different perspective. First, we need to become more aware of these interactions and stop viewing them as innocent flirtations. Women have been taking advantage of this chink in men’s armor since time began, largely because we have been oblivious to it. However, by studying them in action with other men and recognizing how we are stimulated by seduction and lust, we can change the dynamic. Over time, we will have a better understanding of how these connections work and be totally in charge.

We must also adopt a more give-and-take, or bartering, style of communication in our relationships with women, which can give us the skills we need to cope when we are at our most vulnerable. Doing this regularly and often will be like training for a competitive sport, helping us to achieve the sort of form that can help us overcome the toughest of challenges.

Once you can see what is really going on and deal with it in an appropriate manner, you will have taken the first step towards freeing yourself from being used and abused. Use your language skills to describe the distrust or disgust you feel upon approach. When you’re able to speak up while someone is manipulating or touching you without asking, you will have achieved a real breakthrough as a man. If a woman should act in an inappropriate way, don’t hold back. Confront her with “Please don’t touch me.” Afterward, you will experience a surge of love and respect for yourself. Then consider going even further: “Please don’t flirt and manipulate me.” This how you teach others about the way you should be treated.

Men are the ultimate protectors, rescuers and survivors of our world. By choosing to change ourselves and collaborate with peers to create a modern masculinity, we can augment an evolution that will only gotten better with time. Once we decide to change a behavior or consciously accomplish a task, it is only a matter of time before we transform our worthy goals into wonderful reality. By seeing these false displays of affection for what they are – distractions that weigh us down – we can live up to the full billing of our history and gain a level of respect and self-respect that we deserve.

Men have long been taught to dismiss discomfort and push through pain without complaining or resentment. But changing attitudes about masculinity and rising awareness of how society views our sex have helped us to understand that we can and must have more control over our own destiny. Mastering our biological urges and instincts may take time, but eventually, such discipline and persistence will only add to our confidence and character. From this will come increased satisfaction and true liberation. Once you free yourself, you will be truly energized by an improving sense of worth.

Remember, if you see a woman approaching you, full of flirtatious smiles, you should ask, “Would you like something from me?” She will, of course, answer “yes.” And then you will say, “what is it worth to you?” You will have succeeded in creating a true negotiation, rather than an unhealthy interaction.

Beyond the issue of managing male vulnerabilities, we have many other obstacles to overcome. We need to address the issue of society’s widening empathy gap with respect to men. Males now seem to be disposable or otherwise undeserving of any sympathy or support when they need it most.

Meantime, we are also working toward a greater awareness about cunning feminine wiles and the ways that females abuse us for their own aims and ambitions. Still, the fact that some of us have become more enlightened is not enough. Certainly, our society needs more research into the biological and social forces that shape who we are and our interactions with the world. Under the circumstances, it seems clear that college-level men’s studies programs and men’s offices can and should be at the vanguard in helping males – and society – to address these issues. They should also devote resources to countering the growing bias against men, and to supporting the man-o-sphere as it empowers millions to help themselves.

Men are learning to set boundaries; indeed, millions are finding a new sense of freedom and happiness. After twenty-years of focusing on women’s health issues, it is time to shine more light on what we have to offer and the price we pay for keeping everyone safe and creating a promising future for all. Society and women owe men some measure of gratitude for taking on much of life’s dirty work at a very high cost, mostly with little complaint. It is time that they started to show it.

Tim Patten has published books and articles that celebrate masculinity. His popular and handy investment guide, MGTOW, Building Wealth and Power, helps others in the modern’s men’s liberation movement. His MGTOW classic Why I Cheat, has sold thousands of copies.