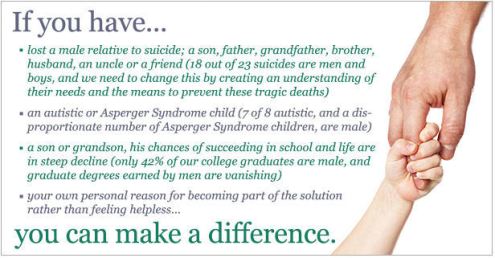 I recently submitted an article about women who sexually assault and rape boys and young men to Feminist Wire.[i] Naively, I expected the magazine would jump at the opportunity to address this growing threat by publishing what I had written. Instead, they rejected my work, offering up the following excuse:

We recognize and agree that sexual violence against boys and men are an important and necessary feminist issue. However, we are concerned with the framing of this piece, which focuses on the “flip” (“women do it too”) that doesn’t account for the dominant power relationships and contexts of institutionalized sexual violence that affects women, men, and transgendered persons. In framing it as “women rape, too” without an engagement with the feminist work that talks about sexual violence as a structural white-hetero-patriarchal practice that affects everyone in different ways, it reads as a denial of women’s experience with violence as a way to make visible men’s and boys’ experience.

Their rejection inspired me to revisit a subject that I’ve looked at previously. In essence, like the modern day scientists who are brainstorming new theories about modeling dark energy, I felt it was time to consider a fresh approach to the male studies curriculum.

When freshmen sign up for a college-level humanities course oriented toward feminism, women’s or gender studies, they are urged to examine relationships between heterosexual and homosexual individuals through a “critical gendered lens.”[ii] These classes, typically filled with women, LGBTQ individuals and a few heterosexual men, are predicated on an examination of gender identification and how identity intersects within other social collectives of power and privilege.

From the outset, attendees are immersed in discussions about the dark side of gendered violence, which is defined as intimidation; emotional, verbal and physical abuse; sexual assault; rape; and the murder of women. Approved textbooks “confirm” the pervasiveness of this far-reaching problem, characterizing it as fact. Gender and Communications maintains, for example, that up to 70% of women will suffer from “systematic gendered violence. [iii][iv]

Faced with this manipulative barrage, it isn’t long before the critical gendered lens of those taking the course is pointed in the desired direction: Women and queer people are socially marginalized and victims of white male power and violence.

To understand how this perspective is reinforced, it is helpful to visualize the mind’s eye peering through a telescope, like those used by NASA scientists, to examine the vast universe of human interactions. When feminist intellectuals developed the notion of a filtered perspective, they determined that a socially marginalized lens was the preferred option, rather than, say, one defined by the most powerful women in history, the prominent lesbian and gay men of history, or women who broke gender barriers in professional sports.

Once the critical gendered lens is in place, students are urged to think about their own experiences of being bullied, whether for being different, small or female. They are also encouraged to recall moments when they might have been abused, molested, scolded and disciplined by men. Over time, the association between their personal experiences and gendered inequality becomes ingrained, and many can’t help but feel that systematic oppression is real, leaving some with anarchic leanings.

Over time, various subjects, including heteropatriarchy−oppressive male heterosexual dominance−the pay gap, white male privilege, neoliberal capitalism, rape culture, and toxic masculinity, are presented to the class. Although the discussions generally include a range of perspectives, the primary focus is on female and LBGTQ oppression. Not surprisingly, the plight of those who have been “disadvantaged” tugs at the students’ heartstrings, reinforcing the manipulated biases of their young minds. It also spurs a desire among many of them to seek social justice through disorder and activism.

Overall, such distortions define the rationale behind why one feminist publication, and likely others, are not interested in publishing my article about women who sexually assault and rape boys and young men. In short, my perspective is not consistent with the feminist gender-lensed narrative, actively promoted over many decades, that white heterosexual males are patriarchal rapists.

By helping to liberate females from the kitchen and bring millions of them into the workplace, feminism has enabled America to make great strides forward. In fact, women’s roles have expanded dramatically; they are making important contributions across society, including in those areas long dominated by men. It has even led to women joining the ranks of those running for president.

The women’s equality moment has over the past half century also enabled the LGBTQ community to make major inroads in many areas of society, in terms of acceptance, tolerance and relationship equality. The inclusion of women and LGBTQ individuals in a wide range of sports, the military, government and major vocations has altered and significantly rebalanced the societal landscape, likely forever.

Arguably, the fastest social changes in history has been accomplished as a result of efforts to improve and expand the rights of women, gays and others who had felt maligned, ostracized or oppressed. I, and others, celebrate these achievements. The advances so far have been amazing, though there is certainly more work to be done. In truth, no one can really say that feminism has not been good for America.

But this cause is not the grassroots movement it might once have been (or claimed to be). It has become a force to be reckoned with, influencing the country’s largest voting block. Feminist groups and publications, rape crisis centers, and battered women’s shelters employ thousands of females; many women also reap direct and indirect personal benefits from the donations and institutional support that feminist organizations receive. Around the country, they are regularly organizing political and health events. They are helping to set the broader agenda.

Unfortunately, not all of Women’s studies efforts are directed at helping those who have been oppressed. Increasingly, radical feminists have sought to gain at men’s expense. Spurred by a rabidly anti-male feminist agenda, colleges have been raising the “red flag” about the threat of toxic patriarchy. Humanities programs, especially those focused on women’s and gender equality, propagandize that men are responsible for an epidemic of rape and violence against females, asserting that only they know how to end it.

And yet, things have not improved; if anything, the situation has gotten worse. The New York Times in 2015 estimated that one out of four women will be assaulted during their time at college.[v] Every day, mothers are warned that their sons, who comprise only 40% of those attending U.S. institutions of higher learning, will be among the estimated one million males who will rape a like amount of their fellow students each year.

By the same token, feminist leaders and women’s studies programs have identified physical abuse as a serious problem requiring their solutions. Two million females are reportedly admitted to emergency rooms each year because of violence and mistreatment by male partners. Moreover, marriages are failing at an alarming rate, with almost one million couples divorcing annually. But again, all of this is happening against the backdrop of teachings and initiatives that feminists claimed would improve relations between the sexes.

In other words, despite their insistence that the feminist way is the best solution to a wide range of social and other ills, their claims have fallen short.

Now more than ever, it is time to consider an alternative approach, one emanating from a masculine perspective and oriented towards helping men like us to end the violence and better serve ourselves and our communities. Males need a new standard of research, education and intervention. More than likely, this new paradigm will draw on the efforts already underway at New Male Studies, an international online interdisciplinary journal for research and discussion of issues facing boys and men worldwide.

There’s little doubt that the approach that has been employed by women and LBGTQ people to improve their standing has had considerable success. But it has only been the first step in defining a society and social order relevant to our times. By creating a critical gendered lens that incorporates the issues and enlightened insights about masculinity being discussed in the “manosphere,” for instance, the evolutionary process can now come full circle, creating a better life for all.

Indeed, while this article was inspired by rejection, it is not a rejection of the feminist approach. Rather, it advocates taking what has proven effective and melding it with the innovative ideas and research that others have been developing. It is an invitation to come up with a new narrative, aimed at promoting a conversation for growth and enabling boys and men to make healthier, higher-quality choices in lifestyles and relationships.

We must all play a role

Like all such initiatives, supporting the new male studies curriculum depends on the efforts and contributions of all involved. Using insights from MGTOW members and the power of the Internet, we can achieve extraordinary synergies and augment the exciting work being done at New Male Studies and elsewhere. Aside from uncovering ideas that lead to better choices, we men can learn to embrace our strengths and understand our weaknesses and biological differences, as well as factors that can help reduce violence and sexual assaults.

In the short run, here are some steps we can take to help further these ambitions:

Humanity is resourceful and ever evolving. Among other things, we have invented processes that harness and freeze the HIV virus, forestalling death; we have crafted exoskeletons that allow paraplegics to be more self-sufficient; and we have developed innovative therapies that enable us to extend and improve lives. These accomplishments were created by men and women working together towards a common goal. By ensuring that we can keep moving forward and become the men we were meant to be, we can help to keep the innovative spirit alive.

Tim Patten released in 2016: MGTOW, Building Wealth and Power. He also wrote WHY I CHEAT – 11 campfire stories for men’s ears only. Both books are a celebration of masculinity and pay homage to the modern men’s liberation movement. Patten previously published the novel about establishing gender equality in professional sports, Roller Babes: 1950s Women of Roller Derby.

If you care about the men you love help us help others bring “Male Studies.”