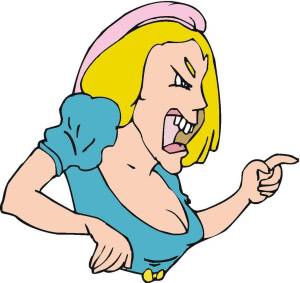 In a 1970s BBC documentary, Angry Wimmin, angry lesbians said that Patriarchy Theory was THEIR WAY to wage war against men. Nothing ambiguous about it.

Lesbian feminist author Maria Mies once wrote, “If patriarchy had a specific beginning in history, it can certainly have an end.” As with other feminist scholars, a group dominated by mostly white lesbians who share a perversely narrow-minded perspective, Mies is convinced that patriarchy–as well as the male sex–is oppressive and malevolent to women. Ostensibly, they advocate for female equality, but their lengthy lectures say otherwise. Their words detail a horrendously aggressive fraternity of privileged white men who pay women pennies on the dollar as they socially and institutionally oppress, dominate, discriminate against, and abuse them.

In fact, the feminists’ words and actions have little to do with righting a wrong, but are instead founded on a theoretical framework, crafted by a lesbian elite, that maintains males are disgusting and immoral by nature. These experts promote no remedies other than the destruction of patriarchy. In some ways, they are like society’s scolding mothers, warning little boys that masturbating will make them blind. They project a worldview based on a myopically gendered lens that has been characterized as a hate crime by Canada’s Studio Brule and a social disease by Milo Yiannoulos. At their most extreme, their theories have morphed into cancers of annihilation, marked by such derisive memes as StopPatriarchy, KillAllWhiteMen, AllMenAreRapists and KillAllMen.

Patriarchy first appeared in Africa about 200,000 years ago, inspired by a natural order of human needs and talents. In virtually all known histories of our ancient ancestors, the role of the male was that of provider and protector; his strength and daring were deemed critical to the survival of the tribe. The best of the lot were (and are) referred to as “alpha males,” idolized for their contributions. There’s little doubt that the rise of the alpha male was inevitable and necessary, enabling mankind to blaze a trail through dangerous and unfamiliar terrain. (That does not mean they were the only ones. Lesbians or gender-fluid tribe members might also have been hunter-gatherers alongside them. )

Over time, the alpha males became the secular and spiritual leaders, kings, pharaohs and emperors, expanding their wealth, influence and power over others. They launched and drove unrelenting efforts to build great monuments, palaces and religious shrines; some spent the whole of their lives creating the many wonders of the world. From the great Pyramids of Egypt, to the Hanging Gardens of Babylon, to the Statue of Zeus in Greece–the lowliest toiled and slaved for these leaders in their efforts to leave enduring marks on the world.

And yet, while many undoubtedly suffered under the oppressive will of these powerful individuals, it is apparent across all civilizations that patriarchy helped to harness and improve a harsh and often violent world, spurring the development and implementation of innovative technologies and breathtaking infrastructure, including electricity and lighting networks, water supply and sewage treatment facilities, railroads, highways, bridges and other features of modern transportation systems, and the construction of homes, schools, hospitals and other structures. A male-dominated social order was responsible for any number of developments, including the Internet, which have benefited countless individuals of varying means. In many respects, patriarchy is everything, and there is little else.

That said, not all of history’s movers and shakers have been male. There have been queens and wives with substantial privilege and power. Eleanor of Aquitaine, born in 1122, was one of the wealthiest and most powerful women in Europe and the world during the High Middle Ages. Egyptian leader Hatshepsut, who lived from 1508 BC to 1458 BC, has been regarded as one of the most influential females in the ancient world. Empress Wu Zetian, who was born in 625 AD and lived for 80 years during the Tang Dynasty, is considered to be the most dominant in Chinese history. There was even a queen of Spain who commanded men to risk their lives sailing three ships into a dangerous unknown in a search for spices; they accidentally discovered the Americas

While the gender imbalance has not been wholly addressed, it is apparent that our world has a richer and far more diverse social fabric than feminist scholars acknowledge. These self-appointed arbiters of society’s alleged failings have defined a naïve model of what the problem is and how it can be fixed. This, in turn, has promulgated propaganda that frightens and disturbs people, especially students, with offensive distinctions and discriminatory labels. While some feminists might have good intentions, all are guilty of using broad strokes and detestable stereotypes in regard to males. Equality aside, there must be a reason for this defilement, other than hatred.

We often hear gender studies professors declare that gender, femininity and masculinity are social constructs, though oddly enough, many will also argue that gay and lesbian people are born that way. In truth, social structures in the gay community of San Francisco–where, one might say, birds of a feather flock together–indicate that gender preferences and perspectives, even in the “gay mecca,” naturally diverge. On any given night, one might see men wearing David Bowie, four-inch, come-screw-me platform shoes, poised to dance the night away at high-tech nightclubs. In contrast, one might find women who have sequestered themselves inside murky sports bars, discussing such topics as sliding-scale entry fees for the poor and marginalized.

Certainly, some lesbians dislike, even hate men. The ladies at a gay bar can often be heard sharing envious jabs emasculating privileged white males, while the Alix Dobkin song, A Woman’s Love, echoes from rickety speakers amid clacking pool balls. Lesbian bars, in contrast to gay-oriented counterparts, are often located in dank and dangerous parts of town. Inside, it is not uncommon to see heavy-set bullies, terrifying to the eye, interacting with boys who look like hooligan girls, while lipstick-lesbians at the bar swear like sailors, waiting, it seems, for the “right” individual. Some patrons are defensive and aggressive; most are manlier than the real thing. The atmosphere reeks of toxic masculinity, feline jealousy and, sadly, lesbian-on-lesbian sexual assault.

If a man happens to walk through the door, he will invariably be faced with behavior that leaves him cringing and with the urge to back off and head in the other direction. In many ways, lesbian culture seems to be a parody of college-level feminist courses, but without the textbooks, note taking and tuition fees. In this self-designed utopia, these individuals have created a female-only social hierarchy–a paradise without patriarchy. Evidently, they want society, more broadly speaking, to be the same.

The Lesbian War on Men

Advocates of this alternative reality have found another great watering hole in college-level humanities departments. Their influence has been growing since the 1960s, when lesbians came out in droves as the women’s and gay rights movements gained pace. An example of how such thinking has distorted our worldview can be seen in a 1970s BBC documentary, Angry Wimmin. In the film, which explores the origins of the women’s movement, angry lesbians said that Patriarchy Theory was THEIR WAY to wage war against men.” They denigrate male sexuality and spout forth on theories that feminist scholars use to prove that all men are violent, oppressive and potential rapists.

Through endless repetition, as well as the unthinking acquiescence and misguided support of the media and the political hierarchy, this view has become the basis for seemingly acceptable slurs that denigrate men as evil and dangerous–which, needless to say, are having a harmful influence on those individuals, especially the young and impressionable, who hear such messages. Unfortunately, such distorted notions are not helping to make society more equal or just. Rather, they are spawning an endless cycle of disgust and distrust that is having a debilitating and far-reaching effect, especially on young boys.

As noted earlier, patriarchy is widespread, impossible–and unnecessary–to dismantle. That said, it is becoming increasingly inclusive, with females such as France’s Liliane Bettencourt, the richest woman in the world, and Alice Walton, the second richest with $32.3 billion to her name, near the top of the pyramid. In fact, reports suggest that 10% of the world’s most powerful people are women, while 1% are people of color. Diverse and ever changing, this social framework is protecting women and providing financial and other benefits to many of those who been disenfranchised.

Unfortunately, the lesbian scholars who exert such a powerful influence on college-level humanities, women’s and gender studies programs, and whose careers have been built on warped theories, disagree. But their influence is diminishing. Rational and clear-thinking people are recognizing that all genders, races and nationalities must surmount any number of obstacles to become socially mobile and financially buoyant.

As a result, they are seeing the feminist mantra for what it is: fringe-nutcase conspiracy theories that rely on hyperbolic narrow-mindedness to justify a collective aversion toward men. The pseudo-scholars have built a rickety latticework on propaganda and half-truths. They have spent considerable time slaying invisible dragons and poisoning minds. Instead of helping people to become more productive and happy, they have inspired anger and anarchy.

Even so, there is no reason to try to rid the world of these lost souls or disrupt their livelihoods. If they choose to escape from what they imagine patriarchy to be by congregating in closed (and closed-minded) communities, socializing in lesbian bars, and proselyting in the women’s and gender studies departments of institutions of higher learning across the country, so be it. They have made their choices freely, and they have the same right as any of us has to live lives and embark on careers that we believe are best for us.

But that does not mean we should do nothing. We should try to benefit from their mistakes. We should take pains to understand their gendered lens and choose to inclusively move forward, ignoring the false credo of male domination. We must also come to terms with the secret of happiness: accepting what is. For all its faults, patriarchy has, since time immemorial, helped to solve a great many of mankind’s problems and protected us from harm. We should modify and enhance it for the benefit of all.  By embracing how things actually work, we can build our own power, wealth and freedom, and can draw others toward us that we can love and appreciate.

Tim Patten published his own search for identity in a hysterical and moving autobiography: My Razzle Dazzle under his pen name Todd Peterson. Tim also released in 2016: MGTOW, Building Wealth and Power and WHY I CHEAT – 11 campfire stories for men’s ears only. Both books are a celebration of masculinity and pay homage to the modern men’s liberation movement. Patten previously published the novel about establishing gender equality in professional sports, Roller Babes: 1950s Women of Roller Derby.