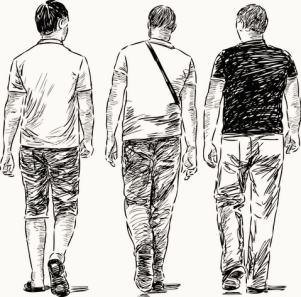 The Lonely Single Men of MGTOW

Around the world, a large and growing contingent of males is sounding a clarion call about the dark side of marriage. In doing so, they are drawing scorn and being contemptuously regarded as “lonely hearts,” “loners,” “losers,” “women-haters” and “recluses.” But nothing could be further from the truth. They have made an informed and rationale choice based on modern day realities and a keen understanding of what is important. What follows is an exploration of the world of Men Going Their Own Way (MGTOW) and the lives that these individuals choose to lead.

Since no-fault divorce laws were enacted in 1970, over 50 million American men have endured oppressive divorces initiated by their wives. Ironically, if not for the fact that females roundly criticize males who avoid the marriage commitment, it is the wives who are choosing to break their vows to more than one million men each year. These women are massacring families, instigating frantic disarray among loved ones, and derailing the expectations of innocent children, creating panic and a fear of the unknown.

Despite the fact that these women are to blame, few seem to criticize them for the heartbreak they are causing, or for using the power of the government to take money, assets and fees from spouses and, as is usually the case, to gain custody of the children. In the end, most husbands are left dumbfounded–without a home, support system or reasons to work and keep going. Their souls are ripped apart. They have been used up and tossed aside while ex-wives ease into government welfare and support programs that provide incentives and a motivation for women to divorce. In a fair and reasonable world, those who advocate equality would maintain that such blatant bias warrants protests and legal action.

Most Americans seem to think that marriage is a state of heavenly happiness.  Unfortunately, those who seek such a blissful existence are unaware of or blind to the large numbers of divorced males who suffer in obscurity, staving off depression, anger, alcohol and substance abuse. Sadly, many have ended up homeless and committed suicide. The National Institute for Healthcare has found that divorce ranks as the number one factor associated with suicide rates in major U.S. cities. In the 1980s, a coroner linked the high rate in his locale with men’s inability to cope with divorce.

Things are different on the other side of the gender fence. In contrast to the shameful way in which ex-husbands are treated–seemingly discarded like yesterday’s trash–society protects, supports and advises ex-wives. In fact, it is astounding that divorced males can even remain healthy as they struggle to cope and emerge from the post-divorce darkness. For the luckier ones, they find their way to the brotherhood of MGTOW, wrongly declared as a hate group by the Southern Poverty Law Center after radical women’s organizations made false and malicious claims about misogyny in its ranks.

In truth, the so-called bad apples are anything but. What follows is a compilation of selected anonymous statements from various MGTOW participants, edited, condensed and grouped by topic, that shows what this progressive movement is really all about:

Everyone knows that married men are not allowed to maintain all their pre-marriage friends and hobbies. The married guys in my world are the loneliest and most miserable people of anyone I know.

“Lonely” is some guy in suburbia, whose wife has just exploded into an emotional rage and kicked him out of his own home. I’m not sure any of the women I’ve been with appreciate solitude like I do; they’ve always stirred up drama with me and my friends, and hostility between my extended family members.

I, like most men, have been shamed into being with and married to someone because that is what society wants. Am I lonely now because I am alone? Nope. In fact, since leaving the “jealousy in marriage plantation,” I feel more alive and free to do and pursue anything I want to so long as it is within the confines of law.

I am single and have enjoyed the benefits of that for too long now to willingly give it up. However, that doesn’t mean being sexless; it is now my choice as to whom, when and how. Why? My body, my choice.

The idea of living alone frightens most people and MGTOW is often criticized for advocating a life of loneliness. But these are stereotypes. Bachelors in modern society often have the most active and wholesome romantic relationships available.

I have a very diverse network of friends–almost too many, really–so I’m hardly ever lonely. I have a lot of hobbies and, since I live alone, there is always work to be done on the house and vehicles. Nothing can be delegated. I’m so busy running my business.

Financially, I am in control. I choose what to do with my money, where it sits–whether in cash or assets–how much is saved, and how much I am happy to spend. If I want to buy something–anything–and I can afford it, I do, because I don’t have to seek permission nor beg forgiveness. My money, my choice.

Now I am 50, fit and happier than I have ever been in my life. I have a six-figure income, two properties, bikes and a truck, money in the bank, investments and more. As Babarossa says, men are the prize in any male and female relationship. I would not risk my assets or waste my time with a woman to alleviate a perceived loneliness, or succumb to gynocentric shaming–that would be insane.

Which is worse? To be alone, or to be trapped in a relationship with someone who is using you for your ability to provide security but won’t return your love and respect.

Hedging against loneliness by getting married is like hedging against a toothache by playing Russian roulette–and you live next door to a dentist.

It’s not men who are failing to live up to their end of the marriage contract; it is the social, financial and legal consequences of divorce that have been the real nail in the coffin.

Being unmarried gives me (near) complete control over my own destiny.

Me, personally, I am a volunteer firefighter, so I’m always at the fire department, or I go to the gym and get my workout in. I participate in local political meetings and have become a mentor for the Boys & Girls Clubs. I volunteer at a homeless shelter and help people in need. Loneliness should not be a factor in any of this. I go camping, hunting, and fishing with friends. I put some aftermarket parts on my ride and take it to a car show and meet other people who are doing the same.

When I get home I not only want to be alone, I most definitely NEED to be alone. I have a nice home, an awesome piece of land, views of the wilderness for miles, and animals, and no one passing judgment or telling me how to live, how to look, how to spend my time or what intellectual interests or hobbies to pursue. I am far happier and more at ease in my own mind and space than I ever have been. When I lived with a woman or was going steady, I suffered their constant interference in my activities.

Unfortunately, the thoughts of tens of thousands of divorced men who have died from suicide, the millions who are homeless, or the countless others who are lost in a hurricane of booze or drug addiction, are missing. Without their words, all that remains are the courageous survivors of institutionalized abuse who have chosen to speak in their place. MGTOW individuals have earned doctorates in dodging bullets, surviving the underworld, and tunneling through the razor wire of divorce. They are ordinary men who have overcome extraordinary odds, and have earned the right to speak above those who seek to shame, deny and distort.

For myriad reasons, the institution of marriage has failed and will continue to do so, leaving communities of ex-husbands in need of safety nets that should be as widely and as effortlessly available as those that exist for ex-wives. One day, your son, brother or uncle will be confronted with the darkness of divorce and in need of emotional guidance and assistance. If he connects with MGTOW, he can find help from those who have suffered through more social and institutional oppression than most women will ever know.

A bold and enlightened way of thinking is unfolding in the “manosphere.” Caring and knowledgeable males are opening their hearts and offering assistance to divorced dads and ex-husbands. It is MGTOW that has defined the right sort of survival strategies; they are worthy of being designated as the enduring safety net for the male casualties of marriage. Their trailblazing efforts to raise awareness of marriage and its impact on men is not only honorable, but represents an ethical awakening and a vision for redeeming those who might in future suffer a similar fate.

Tim Patten released in 2016: MGTOW, Building Wealth and Power. He also wrote WHY I CHEAT – 11 campfire stories for men’s ears only. Both books are a celebration of masculinity and pay homage to the modern men’s liberation movement. Patten previously published the novel about establishing gender equality in professional sports, Roller Babes: 1950s Women of Roller Derby.

The Lonely Single Men of MGTOW