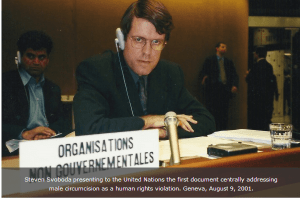 Filmmaker Brendon Marotta, director of the upcoming movie “American Circumcision,” has very generously worked with ARC to prepare a release by Gotnews.com of a surreptitiously recorded audio clip from October 19, 2013, the second day of the Charleston, South Carolina debate between J. Steven Svoboda and Dr. Michael Brady of the American Academy of Pediatrics (AAP). The audio clip demonstrates that the AAP has lied in the past when claiming that circumcision does not reduce sexual sensation in the penis.

The moderator referred to below and in the Gotnews.com release is Dr. Robert Sade, who organized the Twentieth Pitts Lectureship in Medical Ethics, held on October 18-19, 2013 at the Medical University of South Carolina in Charleston, in which Dr. Brady effectively conceded defeat on the second day, stating that he was unable to respond to any of our arguments.

Dr. Sade also guest edited the issue of the Journal of Law, Medicine and Ethics in which the proceedings of the event were published including the article by Svoboda, Peter W. Adler, and Robert S. Van Howe, titled, “Circumcision is Unethical and Unlawful”  (http://arclaw.org/resources/articles/circumcision-unethical-and-unlawful). Two other physicians on the Charleston panel told Svoboda that they changed their positions to pro-intact based on the evidence we presented.

To support the work of Attorneys for the Rights of the Child, please visit http://arclaw.org/donate.

Attorneys for the Rights of the Child

AAP lied about circumcision not reducing sexual sensation in the penis