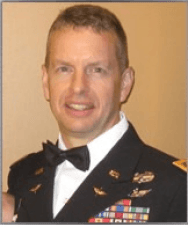 He and his family have left the Fort Campbell region and have settled in a new area.  They are now free from the glares that followed them wherever they went, under the cloud of embarrassment and suspicion caused by all the events surrounding his wrongful prosecution; or should we say, a persecution on a scale of the Duke Lacrosse case on steroids.

Everything and anything that thousands across the country are saying what is wrong with the military’s sexual assault witch hunt are contained in Kit’s case.  Not only that, but there is still the matter of an unsolved triple homicide connected to his case with one of the victims whose was expected to be a star defense witness.

Nonetheless, Major Martin is free and his court-martial nightmare is over.  Currently, he is still on unpaid administrative duty and is exploring his options for appeal.

Major Martin has shared some of the things that he learned while incarcerated, one of which was the high number of servicemen who have been wrongfully convicted and incarcerated.  Some of the stories are worse than his; a serviceman falsely accused and wrongfully convicted who lost all of his benefits; his wife now dying of cancer, and a son who was murdered while he was incarcerated; a serviceman falsely accused and wrongfully convicted who had to leave his young biological daughter in the hands of his ex-wife and false accuser; the young girls former step mother, who previously had been investigated twice for child neglect, and there is nothing he can do about it.  A serviceman accused of sexual assault from a one night stand from a barmaid with a history of so many false allegations that she had been dismissed by local police, who has three daughters and just developed cancer.

Too many stories to list here now; too many tragedies, but when we learn of more details, we will bring those stories here.

The military’s sexual assault witch hunt is a tragedy of biblical proportions; the numbers of wrongfully convicted are staggering, and the numbers, and the stories of the negatively affected family members left in its wake should and must be a national outrage.  The public is clueless about what really happens in these false allegation cases, and few if any politicians have a grasp on what goes on and are either powerless to do anything about it, or ignore it for political correctness and expediency.

But the good thing in the case of the U.S. v. Army Major Christian Martin, is the fact that activism and advocacy combined with competent legal counsel, investigators and experts, turned a case originally consisting of over a dozen felonies and a potential sentence of 58 years in jail, into nothing more than a final outcome of a conviction of two lowly misdemeanors and a little over two months in jail; and even that was unjustified.

The Army had to convict him of “something,” and corrupt, lying Army prosecutors like Jacob Bashore and James Garrett go on with their daily lives; convinced in their own feeble brainwashed minds that they have done something honorable.

It is estimated that there are more than 100 published articles on Kit’s case, with more than one million page views.  Some are on main stream press sites but most appear on advocacy group websites and blogs like NCFM, A Voice for Men, the Center for Prosecutor Integrity Military Justice Project, Save Our Heroes’ Project, Bob McCarty dot com and Military Corruption dot com.  We have no idea how many times his articles have been reposted on various Facebook pages and shared with others.

Although Major Martin is free and his court-martial nightmare is over, the advocacy, activism, and post-conviction legal issues are far from over.

As the outstanding stellar soldier and human being that Major Martin has always been, his future plans include paying it forward to advocate for those left behind; the forgotten; the casualties and their families in the military’s manufactured sexual assault witch hunt war on its own.  A war to placate special interest groups, cowardly compliant commanders and JAG lawyers looking for that next promotion, and the industry machine in place in order to justify its glutinous $250 million dollar a year budget.  The manufactured narrative and myth must be protected by any means necessary.

If these stories disturb you; as they should, then take the time to write your elected representatives and tell them of your concerns of the injustices going on daily in our military courtrooms.  If you would like, you can send a copy of those letters here or to one of the groups mentioned above, and keep in mind the following quote.

“It does not take a majority to prevail… but rather an irate, tireless minority, keen on setting brushfires of freedom in the minds of men.”