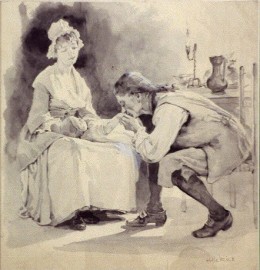 The following discussion between two women Eliza and Mariana was published in 1707 AD under the title Female Grievances: Dialogues between two Young Ladies concerning Love and Marriage. The discussion shows that even back in the 1700’s women were trying to limit men’s freedom and stop men from living as bachelors. – PW

Eliza: Amongst all the female grievances we have hitherto debated there still remains one we have not yet touch’d upon. There are an abundance of bachelors who, thro’ a cowardly apprehension of the cares and troubles of the marry’d state, are so fearful of entering into it, that they would rather run the hazard of damning their souls with the repeated sin of fornication, than they will honestly engage in Wedlock to procreate within those reasonable bounds which the united laws of both God and man have both religiously appointed: Therefore methinks it would well become the care of a Parliament to redress this grievance, so very hurtful to the Kingdom in general, as well as to our sex in particular, by some compulsary law that should enforce Marriage upon all single sinners who otherwise will never keep a cow of their own whilst a quart of milk is to be brought for a penny.

Mariana: I’ll assure you I like your thoughts very well, for if we consider rightly, we can allow bachelors to be no other than drones in the great-hive of the Common-wealth, that enjoy without reason, the advantage of marry’d peoples labours, in having their liberties and estates secur’d by the loss of other men’s lives, and will not be industrious to repair from their own loins the native strength of the Kingdom, for tho’ they have not continence enough to forebear the pleasure, yet the liberty they take is with such common strumpets, who by their debaucheries and distempers, are render’d wholly incapable of producing any serviceable fruits of their sinful labours. Therefore pray let us lay our heads together and consult of some proposals that might move our Senate to a wise consideration of this weighty matter.

Eliza: Pray, cousin, do you begin and propose one clause and I another, and so we’ll proceed till we have digested our project into so many several heads, that may be an ease to the Senate if ever we should hereafter petition the House to bring in a Bill for the Advancement of the Church and the suppression of Vice, and the improvement of the native strength of Her Majesties Kingdom in a lawful way.

Mariana: With all my heart; you would have me begin, so accordingly I’ll proceed to the business, vis:

That every bachelor above the age of twenty, and childless widower under the age of fifty, shall be obliged to marry within the circle of one year, commencing from the date of the Act, or else be liable to be press’d into the Sea or Land Service (after the expiration of the Term limited) when ever Her Majesties Forces shall need a further recruit.

Eliza: That their personal effects shall be all sequester’d by the government, and be distributed by an Almoner for that purpose, into the hands of so many trustees, chosen out of every Parish, for the better supporting and maintaining all such poor children as have lost their fathers in defence of the Kingdom, and the overplus to be disposed of amongst those miserable husbands who are plagued with scolding wives and smoky houses.

Mariana: That an alms house shall be built and endow’d for the reception of all such childless widowers and bachelors as shall, by reason of their low stature, crookedness, weakness, or any other infirmities whatsoever, be judg’d unfit for His Majesty’s Service; and that every such widower or bachelor shall be allowed one warm frize gown every year with a yellow badge upon the right arm, upon which shall be stamped an Ape in a string, and under shall be engraven this motto:

Who dies an old maid
leads apes when she’s dead;
But he that hates wiving
shall lead ’em whilst living.

That every single member shall have a convenient apartment to himself, with a bed, two pair of coarse sheets, one leathern chair, one earthen candlestick, a green chamber-pot, and a little grate, and every ten of them shall have an old woman to wait upon ’em, and to hand ’em their water-gruel, barley-broth, turnips, carrots and potatoes; for that they shall not be allow’d any other food than soop, herbs and roots, because they have forfeited the Liberty of an Englishman, by not loving the flesh in a righteous way, therefore they ought not to indulge their vicious appetites.

Eliza: O sye, Madam, should we put such a cruel article upon the poor gentlemen it would be constru’d as downright tyranny, beyond all president.

Mariana: I am sorry to see you so tender of those who are so cruel to us, whoever refuses out of obstinacy to comply with the Term has resolved himself into a state of insufficiency, choosing rather to suffer than to marry; therefore we ought to consider them as much superanuated as to our sex, as if he were fourscore, but no infirmity ought to be allowed a good reason against a man’s marrying; for tho’ he is unable to get children, he is nevertheless able to father ’em; therefore, I think, all those that stand out in contempt of wedlock, cannot be dealt with too severely.

Eliza: Truly, cousin, upon second thoughts I must agree with you that they cannot be use’d to hardly. But, I doubt the Parliament will expect we’ll be setting forth the danger of celibacy to a nation as the chief motive to induce ’em to take our other proposals into their wise consideration.

Mariana: That’s well thought on; but we must be very brief, for the Members of Parliament hate long things, tho’ we women are said to love ’em; therefore let us begin and help one another to concisely set forth the dangers of celibacy.

THE DANGER OF CELIBACY

Eliza: In the first place it would be a means of greatly impairing the glory of the established Church of this Kingdom, by lessening the interest of the Bishop’s courts, which depend much upon marriage licenses, and consequently the grandure of prelacy must be reduced, not only so, but it would prove a great disadvantage to all the inferior clergy should the people once shake off the Church-shackles, and get a habit of falling to without grace.

Mariana: Secondly, it would be a means of ruining all families, dispeopleing the Kingdom to nothing, and leaving our posterity unable to defend themselves against the insults and invasions of their foreign enemies; for no copulation must bring the Kingdom to nothing; and universal liberty would beget distempers instead of children, and force the nation to turn their colleges and alms-houses into sick-hospitals.

Eliza: Thirdly, it would cause rapes and murders, for if both sexes were in common, both would contend for enjoyment where they could have no claim; besides, the care and education of children would be totally neglected, for what man would be burden’d with the charge of those brats, that another might have the liberty of getting as well as himself.

Mariana: Fourthly, it would be a means of introducing a beastly use of sodomy, making every timerous leacher turn a R—–y for fear of contracting that filthy distemper in a minute that may’nt be claw’d off in a twelve-month.

Eliza: I find we shall be able to dispatch our undertakings to a nicety, a few more of these considerations, when we have more time to think, will certainly prevail, but the lateness of the evening now calls us to be marching.

Source: Gynocentrism and its cultural origins