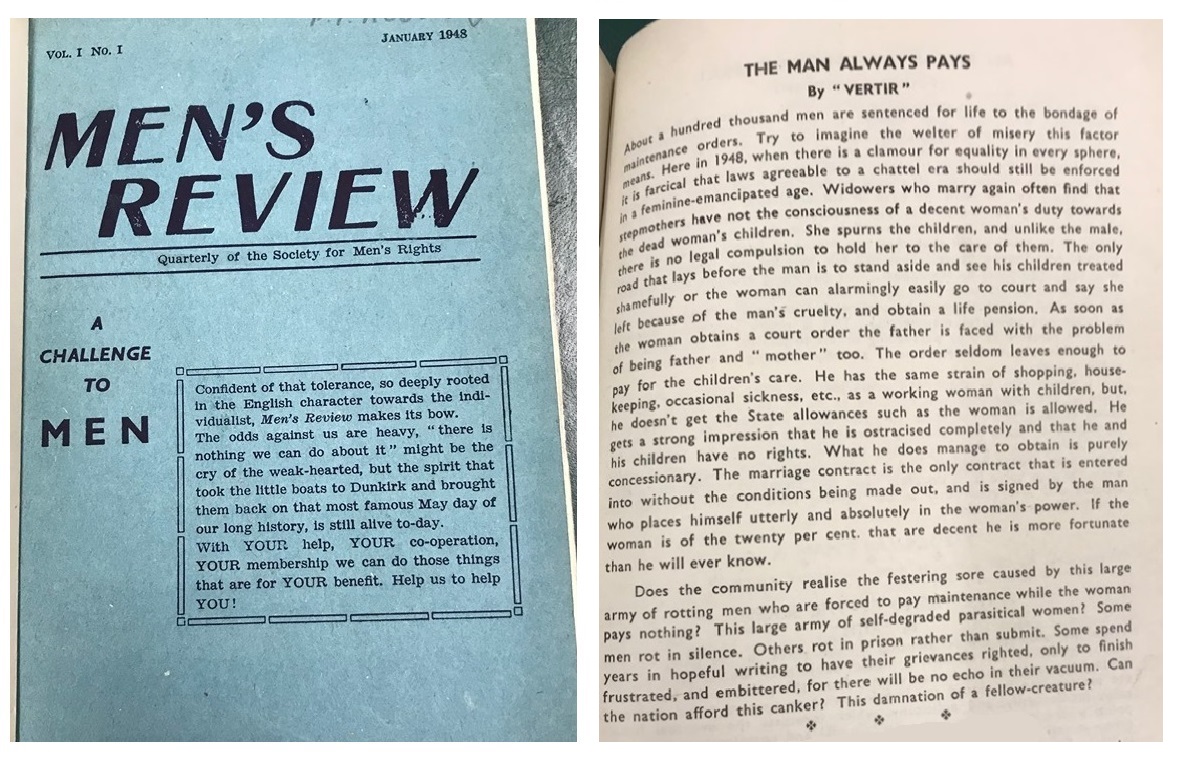 We continue the series of Men’s Review excerpts below with this piece discussing the unbalanced financial and parental burdens placed on fathers. – PW

About a hundred thousand men are sentenced for life to the bondage of maintenance orders. Try to imagine the welter of misery this factor means. Here in 1948, when there is a clamour for equality in every sphere, it is farcical that laws agreeable to the chattel era should still be enforced in a feminine-emancipated age.

Widowers (men) who marry again often find that stepmothers have not the consciousness of a decent woman’s duty toward the dead woman’s children. She spurns the children, and unlike the male, there is no legal compulsion to hold her to the care of them.

The only road that lays before the man is to stand aside and see his children treated shamefully or the woman can alarmingly easily go to court and say she left because of the man’s cruelty, and obtain a life pension. As soon as a woman obtains a court order the father is faced with the problem of being a father and “mother” too. The order seldom leaves enough to pay for the children’s care. He has the same strain of shopping, housekeeping, occasional sickness, etc., as a working woman with children, but, he doesn’t get the State allowances such as the woman is allowed. He gets the strong impression that he is ostracised completely and that he and his children have no rights. What he does manage to obtain is purely concessionary.

The marriage contract is the only contract that is entered into without the conditions being made out, and is signed by the man who places himself utterly and absolutely in the woman’s power. If the woman is of the twenty per cent that are decent he is more fortunate than he will ever know.

Does the community realise the festering sore caused by this large army of rotting men who are forced to pay maintenance while the woman pays nothing? This army of self-degraded parasitical women? Some men rot in silence. Others rot in prison rather than submit. Some spend years in hopeful writing to have their grievances righted, only to finish frustrated, and embittered, for there will be no echo in their vacuum. Can the nation afford this canker? This damnation of a fellow-creature?