Having touched briefly on tradwives in the past, I though it was time to pen some matured thoughts on the subject – in particular the thought that there are actually two very different models of the tradwife.

The oldest, best, but apparently least appreciated kind of tradwife is the one who brings value to the table for men looking to pairbond or start a family with a woman – I’ll refer to her loosely as Tradwife-1. The other, more popular conceptialization of a tradwife amounts to a shallow and performative grifter who spies an easy ride on some poor man’s goodwill and labor, whom I’ll refer to as Tradwife-2.

Tradwife-1 mirrors a pre Victorian-era model consisting of non-gynocentric forms of traditionalism. It advocates a mixture of separate gender roles mixed in with a significant amount of role-sharing as might have been seen on a traditional farm, homestead of ‘cottage industry’ of pre-industrialized Britain or United States. This model assumes a commensurate valuing, interpersonal devotion, and labor contribution from both husband and wife.

Tradwife-2 is different, and aligns more with the post Victorian-era model of family. She is promoted by advocates of a traditional gynocentrism which reached its apogee in the 1950’s housewife, and her needs, wants and comforts are generally prioritized over those of her husband. In this model, men and women are called to adhere to strict gender roles with husband functioning as symbolic ‘head of household’ who protects the wife and labors to earn all the money, while she makes babies, apple pies, keeps the house clean.

The model for the tradwife-2 is what many people refer to as the ‘two-spheres doctrine’ in which men and women are apportioned sovereignty over different realms – he over the political and labor realms, and she over the domestic and social realms. For the red pilled audience, this version of the tradwife sometimes appears as a parasite in an apron while contributing very little to the relationship, especially in the era of electrification and white goods. 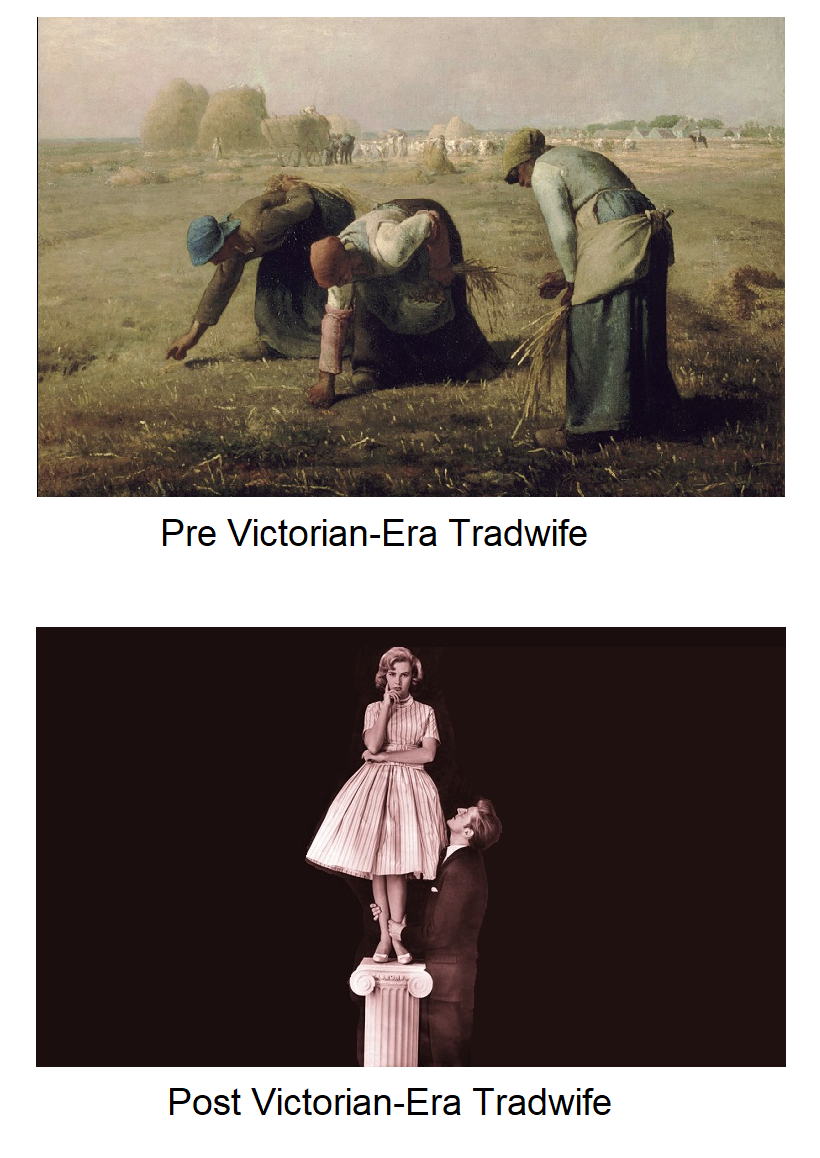 These two tradwives are the traditional alternatives to feminist-inspired relationships. For men who can’t see value in older models, however, and who gravitate more toward what Warren Farrell calls a “gender transition movement,” there’s a newer kind of a female companion we will refer to as the modwife.

Farrell’s proposed gender transition movement, and implied concept of a modwife, refers to greater role-sharing among men and women than has traditionally been the case. Farrell proposes, for example, that women may wish to contribute more labor and more income so that “neither sex is expected to pay more than half the income,”1 and that men may wish to spend more time with family so that “both sexes raise the children.” He states,

“Taking what had worked for most women traditionally and seeing it as a plot against them led us to see men as “owing” women. This created Stage II entitlement: women being entitled to compensation for past oppression. This prevented us from seeing the need to make a transition from Stage I to Stage II together : the need not for a women’s movement or a men’s movement, but for a gender transition movement.”1

“A gender transition movement will be the longest of all movements because it is not proposing merely to integrate blacks or Latinos into a system that already exists; rather, it is proposing an evolutionary shift in the system itself—an end to “woman-the-protected” and “man-the-protector.”2

Farrell’s proposed transition movement involves stages of a grand historical process, which are simplified as follows:

By this process modwives are born, whom I’ve referred to elsewhere as women who have embraced multi-option lives over more traditional roles, and who accept or encourage multi-option lives for their male partners. While containing the word ‘wife,’ the term modwife applies equally to non-married women who follow the principles being outlined here… so there’s no need to worry, men; this is not a Petersonian advert for marriage.

‘Modwife’ was coined as an alternative to the popular trend in tradwives outlined above. Both the tradwife and modwife eschew feminist prescriptions for relationships because they are geared toward female domination of men and not to partnerships based on reciprocal labor, value and devotion. A distaste for feminism, however, is where the similarities between tradwife and modwife end.

Philosophical outlook of the modwife

The unlikelihood that modern women will embrace tradwife roles of yesteryear with any consistent or genuine commitment underpins attraction to the modwife option. Thus, for a best-case scenario today’s multi-option women can support their male partners to embrace multi-option lives also. The modwife’s modus operandi is based on personal liberty within relationships, extending a freedom of opportunity to her partner such as society has championed for her.

Yet few multi-option women today are willing to extend such multi-option liberty to men, preferring instead to pocket the advantages extended by women’s ‘liberation’ while expecting their boyfriends and husbands to remain in the mismatched role of protector and provider. There are women however, very limited in number as they are, who lean toward the model of commensurate liberty for both men and women in relationships — some of them will be recognized among the supporters of the men’s rights movement.

That libertarian spirit is understood as belonging to the political sphere, but it is accepted by the modwife as a guiding principle in her relationship with men. It emphasizes individual choice, relative autonomy, voluntary association, individual judgement, free will, self-determination, and free labor-sharing arrangements and agreements. In a word; freedom. Is this a rare stance among women? Absolutely yes, but they may exist for the man who is discerning, patient, and willing to hold fast to his values.

To summarize, the more shallow version of the tradwife is gaining popularity among traditional conservatives who have little appreciation for, nor awareness of the older, pre-Victorian models for same. Alternatively we have the shaky concept of the modwife touched on by Farrell, myself and others which may be a viable alternative but such women are currently as rare as spotting a unicorn in the forest. These templates offer ways of navigating the available relationship territory, and as always the choice to explore them, or abstain completely remains yours.