The Warrior & The Fishwife – Female Archetypes in Virgil’s Aeneid 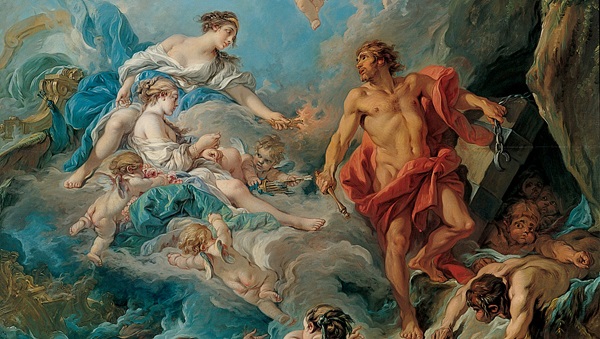 EDITOR’S NOTE: Following on from his previous exploration of male archetypes in The Aeneid and the horrors of a blue pill existence, Jai Singh investigates the same work in search of female archetypes, with particular emphasis on the goddess Juno as a goddess who embodies feminist attitudes. Juno, as many here will be familiar, is the Roman version of the Greek goddess Hera who was previously explored in these pages as a representation of feminism and feminists. For anyone interested in learning more about the figure of Hera/Juno and her pivotal influence on fomenting gender discord, I further recommend the video channel of Greta Aurora, a skilled archetypalist who will soon be introducing a series of analyses on the Hera archetype and its associated impact on men, boys and ‘non-Hera’ women. — PW.

There are female archetypes in Virgil’s Aeneid that are worth analysing to gain an understanding of what women can do when they are either mature and competent leaders or immature and petty children who are hellbent on producing nothing but undeserved suffering in the lives of others. The warrior Camilla is Virgil’s key example of the former type of woman in the poem, while the goddess Juno is the key example of the latter type of woman.

Camilla is the leader of the Volsci, an Italian tribe that aids Turnus and the Rutulians in the war against the Trojans. Even though she has little influence over the progress of the story, her character serves as a noteworthy female ideal, given her strength and competence in the battlefield. Her backstory is outlined in Book XI, where the goddess Diana recounts how Camilla was raised by her father, Metabus, who aligned her with the Roman goddess of hunters when she was a baby (here, we can see a link to the Amazons and thus Wonder Woman). Throughout her life, “she preserved a constant love for her weapons [her javelin and bow and arrow] and her chastity,” (page 254) having never gotten married, which is arguably evidence of her fierce loyalty to the worship of Diana, the representation of an ideal which Camilla likely seeks to embody in her own life.

When she is introduced in the poem at the end of Book VII – as the war with the Trojans commences – Virgil describes how, “mothers came thronging,” (page 164) to see her head off into battle, which implies that she serves as a role model for the women of Italy; her speed is her unique feature, as Virgil also notes that she has, “a fleetness of foot to race the winds.” (page 164) Between lines 664 and 724 of the Latin text of Book XI, Camilla slaughters many enemy Trojans and Etruscans (an ally of the Trojans), with Virgil comparing her to a, “sacred falcon,” chasing a dove, “high in the clouds,” (page 258) due to her agility and ruthlessness; her taunting of two soldiers (in the second case, she is responding to another taunt) is no different from the kind of taunting that we would expect from the male soldiers.

I am stressing this point about Camilla’s competence because hand-to-hand combat is a domain where the physical differences between the sexes are definitively put to the test; the physically weak or untrained will die quickly in the battlefield of swords, shields, javelins, spears, arrows, and chariots, as opposed to in the air-conditioned office of the average white-collar worker. Camilla’s intensive combat training – begun when she was a mere, “infant,” (page 254) – has improved her competence to the point of rendering sex an irrelevant difference between her and the soldiers whom she slays.

If one was somewhat literal in their interpretation of how Camilla is characterised, one could argue that she is like the modern career woman who forgoes the creation of a family and instead spends almost all of her adult years in the office. However, her characteristics still remain admirable from a red pill perspective; she willingly adopts the responsibility of defending Latium from the incoming, “cavalry,” and, “horsemen,” (page 252) of the Trojans and Etruscans, and the Latin phrase that Virgil uses to describe her death is the same phrase used to describe Turnus’ death – vitaque cum gemitu fugit indignata sub umbras (“as her life left her with a groan and fled in anger down to the shades” – page 261).

This may be Virgil’s way of aligning the two as brave warriors whose deaths were ultimately undeserved. There are no contemptible or immoral aspects of her behaviour that would render her unworthy of respect – most importantly, she does not use her strength to tyrannise others – and thus she stands as a unique female ideal in the Aeneid.

On the other hand, we have the goddess Juno, who most prominently features in Books VII, X and XII. Juno’s motivations for her continued opposition to Aeneas are twofold – firstly, she wants to protect the Carthaginians, who are destined to be wiped out by the future Romans (this is Virgil’s allusion to the Punic Wars, a series of wars which Rome won), because they are her most devoted worshippers. Secondly, she has a personal vendetta against the Trojans because she was not given the prized Golden Apple of Discord at the Judgement of Paris (Paris was a Trojan), one of the events that led to the beginning of the Trojan War. Straight off the bat, we can see that the motivations for her behaviour throughout the poem are entirely self-centred.

The war between the Trojans and Italians commences in Book VII purely because of Juno’s callous divine intervention. After noticing the Trojans celebrating their safe landing in Italy, she begrudgingly accepts that, “the decree of the Fates will stand,” (she cannot change fate) but insists on raising as much hell as possible before Aeneas marries Lavinia. She proclaims her desire for Lavinia’s, “dowry,” to be, “the blood of Rutulians and Trojans,” after her actions, “cut the subjects,” of Aeneas and Turnus, “to pieces.” (page 150) She then begins to raise that hell by commanding Alecto – one of the Furies, female beings from the underworld who are used to tormenting men who do not deserve to be tormented – the, “bringer of grief,” to instigate the war, which she does successfully.

Most importantly, Juno does not care that the fulfilment of her vindictive desires will lead to the loss of innocent lives, in the same way that a petty wife will use the family court system to financially and psychologically torture her ex-husband and not give a damn about the impact of parental alienation on the children.

In Book XII, Jupiter successfully persuades Juno to cease her ultimately futile divine intervention by promising her that, “no other race,” will equal the future Romans, “in paying you honour,” which prompts her to nod, “in assent,” (page 287) and depart from the scene. Jupiter knows that Juno’s primary concern is about her worshippers – being as insecure as a teenage girl in depending on external validation for a sense of identity – and reassures her that the Romans will essentially replace the Carthaginians as said worshippers. When Jupiter urges his wife to, “lay aside this fury that arose in vain,” (page 287) Virgil uses the term furorem (a grammatical variation of furor) to describe this, “fury,” underscoring the purely emotionally driven nature of Juno’s childish selfishness.

Interestingly enough, Juno also seems to display the attitudes of a conservative traditionalist when she insists that the Latins – the people of Latium, the region of Italy within which Lavinia resides – “are men.” (page 287) She says this because she fears that they will become feminised (West discusses this, “repeated slur of effeminacy,” used against the Trojans on page xli) if they, “become Trojans,” and adopt the Trojan way of life. This concern prompts Jupiter to assure her that the Latins will remain the dominant ethnic group even when they and the Trojans intermarry; Juno is likely trying to cloak her resentment of the Trojans with a justification of being benevolent towards the Italians (this slur is spoken before Jupiter promises that the future Romans will be devoted to her, so she is not even speaking about people whom she thinks are going to worship her).

Even in Book X, Juno is, “wild with [totally disingenuous] rage,” (page 213) after hearing Venus – Aeneas’ mother and Jupiter’s daughter – argue that the Trojans do not deserve the losses that they have suffered in the war with the Italians; Juno then lies about her role in instigating the war in the first place in Book VII. West, the translator, notes that Juno’s response to Venus offers, “two lies for every one by Venus,” and creates, “half-a-dozen new ones of her own.” (page xxxiii) In describing the Italians as a heretofore, “peaceful people,” and Aeneas as being motivated by, “dishonesty,” (page 213) she portrays the Italians as victims of Trojan aggression and, in acting as a sympathetic spokeswoman for this allegedly oppressed group, she gets to co-opt that victim status for herself.

Throughout the Aeneid, Juno treats Aeneas like she is his overbearing mother, a mother who does not want her son to become independent, because if he did, that would leave her with no role to play in his life, and experiencing that purposelessness is hell for such a mother. Now, despite the fact that a red pill analysis of the fate that compels Aeneas to do what he does reveals the cruel and corrupt nature of that fate, Juno is not resisting this fate out of a benevolent desire to take care of Aeneas. Let us not forget that Book I of the poem depicts the Trojans sailing through a storm conjured up at Juno’s behest; she saw nothing wrong with the possibility of killing Aeneas in doing so.

Juno is the archetypal evil woman – the epitome of the negative feminine, Erin Pizzey’s, “emotional terrorist”, the female antichrist, the, “greatest liar in the Aeneid,” (page xl) the puta of every Regarding Men episode – hellbent on ruining the lives of others, no matter how innocent they are, through eternally pointless conflicts, and who can do so almost endlessly with the power that she has, but which she certainly does not deserve. She does not have a reason to moderate her abuse of her power because she will never suffer any personal consequences for such abuse.

It is in these ways that Juno is the near opposite of Camilla, a respectable and skilled fighter whose behaviours are motivated by loyalty (to Diana, to the Volsci and to her father) and courage rather than the inconstant and self-serving whims of an emotionally unstable child stuck in an adult female’s body. The former kind of woman is arguably optimal for us red pill men to pursue if we are interested in a long-term relationship, but – and more importantly – we must keep the latter kind of woman out of our personal lives at all costs.
________________________________

Note: All page references to the Aeneid are to the Penguin Classics edition, translated by David West.

Original Story on AVFM
Author: Jai Singh
These stories are from AVoiceForMen.com.
()