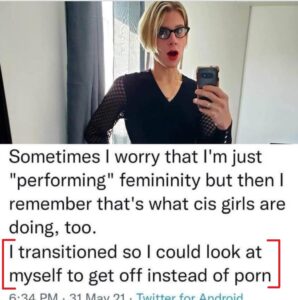 Discussion about transgenderism is all the rage, with many people railing against what they view as a Frankenstein fad, and yet others who are encouraging the trend beyond what anyone would consider reasonable limits – e.g., gender-affirming surgery for children. A third approach is that of the social phenomenologist which accounts for people (including myself) who are more interested in making sense of the phenomenon before screaming blue murder to the sky.

Most people appear eager to discover what Aristotle called the “efficient cause” that might lead men to become transwomen — with the most popular ’causes’ being those of gender dysphoria, and autogynephilia which both end up falling short of sufficient explanations, for reasons I’ll discuss below.

Autogynephilia is defined as a male’s propensity to be sexually aroused by the thought of himself as a female. It’s a paraphilia that is theorized to underlie transvestism and some forms of male-to-female transsexualism,2 as showcased in the below tweet by a transwoman.

Gender dysphoria is the favorite go-to for advocates of traditional gender roles who pretentiously claim the body and psyche can only be exact Xerox copies of each other. As tidy as this formula sounds on its face, even people with a rudimentary understanding of human psychology will see its failings; failings demonstrated by the fact that everyone has an imaginative and psychological identity that is, at least in some ways, at odds with bodily reality:

The psyche tends to ramble off in fanciful ways that do not match seamlessly with physical reality, and it has done this since way back in our evolutionary history. Psychological identity is not, and never will be, a faithful replica of physical reality…. and yet human civilization has continued to thrive in spite of this propensity.

With that human capacity for imagination in mind we can set aside those who champion seamless sex-and-gender identities, and associated social roles. We can also find some fault with Matt Walsh’s recent insistence that there can be one, and only one definition of a woman.1 While Matt is 100% correct in stating that there is only one definition of a biological woman, he conveniently omits the possibility that there may be a definition of ‘woman’ applying to a person’s psychological identity, thus essentially giving us two definitions of woman corresponding to the soma/psyche split.

To reiterate, we all see the obvious XX woman of the body, and then there’s the woman of psychological/imaginal identity which can operate somewhat independently of the former (hence transgenders, intergenders, etc). To illustrate this, Matt Walsh could have a body that looks like Matt Walsh but, hypothetically speaking, in his imaginative and psychological identity he might be more like Napoleon Bonaparte; when it comes to the human psyche anything is possible.

While all this might sound like a recipe for confusion, it isn’t really. Dictionaries attest to the ability of the human mind to accept multiple definitions of a word. I can be stoned to death by literal rocks, and I can be stoned after smoking weed. I can suffer a physical pain, or alternatively I can be in psychological pain – and those ‘two pains’ might not be seamless pains going on at the same time; they might be completely unrelated.

When it comes to the public furor around this topic, the comical part is watching traditional conservatives argue there is only soma, and the progressives argue there’s only psyche. The stupidity of these two partial arguments – and the debate between them – make for the best Punch and Judy show on offer.

If I wanted to take a more strictly phenomenological approach to our topic, I might be forced to say transwomen were both male and female. For example being a woman in one’s imaginative identity will never mean that the chromosomal body has also changed, which indicates there are two identities running concurrently, one male and one female. That said, I appreciate that imagination can override the phenomenological approach to the point of absurdum.

What we can conclude from the more narrow arguments is that they are reductionist and kneejerk responses to a complex phenomenon, and so they provide insufficient explanations for the rise of transgender identity. They may be partially correct but it may help to consider more complex equations, not to mention the approaching of each trans person as possessing a unique biography that led them to become who they are. Following this line of thought I’d like to offer two more factors below that might help to complicate the picture.

When a man’s potential masculinity is felt as toxic due to the operation of internalized misandry, it’s only natural that such a person would have a dysphoric reaction to masculine selfhood. This might be understood as a pathological reaction, but it can be equally viewed as a healthy adaptation to an unhealthy, male-denigrating world — for if I renounce maleness I protect myself from corrosive states of imposed self-hatred, along with de-personalizing those attacks directed at me from a misandric world.

The position I have been leading to can be stated simply this way: Internalized misandry + gyneolatry + autogynephilia = transwoman. Of those three factors, I would consider autogynephilia somewhat more variable than the other two, and while usually present, it is not always.

In order to render this triplicate formula more palpable, I encourage readers to watch the following Benjamin Boyce interview with former trans individual NJada4 who masterfully illustrates the operation of internalized misandry and gyneolatry in his own experiences.

In conclusion, this article claims that autogynephilia, and gender dysphoria prove insufficient as “causes” of the desire to transition but may nevertheless operate as one factor among many. As a student of gender politics I have expanded the causa efficiens to three:

Lastly, and on a more general note Kara Dansky,6 a trans-exclusionary radical feminist who is leading the charge against transgender individuals, recently tweeted, “It is, in effect, a men’s rights movement intended to objectify women’s bodies and erase us as a class. It is left-wing misogyny on steroids. I say this is as a leftist and a Democrat.”

In response I feel it important to clarify that the transgender movement is not a cause célèbre driven by men’s rights advocates, but rather the current support for transgender individuals/rights is derived from the power of government administrations and global regimes playing “freedom one-upmanship” – ie., the feigning of moral purity to position themselves at top of the global hierarchy.

Feminists were the ones who cleared this forest path for the global elites to walk on, and Dansky is right in the sense that it opens a window to become of benefit to men’s rights movement – ie. it dissolves customary culture privileges that have accumulated around the female sex, making those privileges available to all humans, including men and boys, for the first time.7

[1] Matt Walsh: What Is A Woman?
[2] Autogynephilia: an underappreciated paraphilia
[3] Autogynephilia | ContraPoints
[4] Transition and Redemption | a Detrans Story, with NJada
[5] Gyneolotry | Gynocentrism And Its Origins
[6] Kara Dansky, The Abolition of Sex: How the “Transgender” Agenda Harms Women and Girls
[7] Peter Wright, Unintended Effects Of Transgender Activism On Men’s Issues